Imports seen during 2020 appear to be headed toward a new record despite the coronavirus pandemic, and remain at high levels as 2021 begins, according to the monthly Global Port Tracker report released today by the National Retail Federation and Hackett Associates. 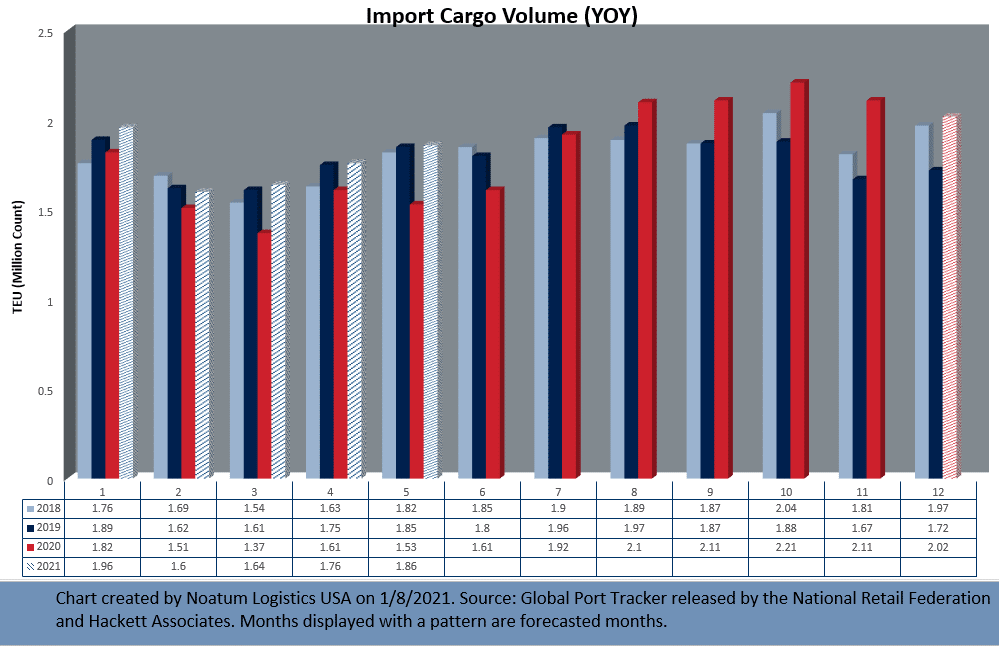 “Nobody would have thought last spring that 2020 would be a record year for imports, but it was clearly an unpredictable year,” NRF Vice President for Supply Chain and Customs Policy Jonathan Gold said. “Consumers and retailers once again proved their resilience in the face of unprecedented challenges. Thanks in part to government stimulus, retail sales saw strong growth during 2020 even with the pandemic, and import numbers show retailers expect the economic recovery will continue during 2021.”

With high import volumes over the past few months, ships carrying goods from Asia have backed up at West Coast ports in particular, and there have been shortages of shipping capacity and equipment including chassis and empty containers.

“With COVID-19 accelerating across the country, the pandemic is causing logistics problems beyond the congestion at the ports,” Hackett Associates Founder Ben Hackett said. “With large numbers of people infected by the virus and unable to report for work, the supply chain is potentially facing challenges to find enough workers for goods distribution.”

U.S. ports covered by Global Port Tracker handled 2.11 million Twenty-Foot Equivalent Units in November, the latest month for which final numbers are available. That was up 24.5 percent year-over-year but down 4.9 percent from October’s 2.21 million TEU, which set the record for the largest number of containers handled during a single month since NRF began tracking imports in 2002. A TEU is one 20-foot container or its equivalent.

December was projected at 2.02 million TEU, down 17.3 percent year-over-year but still one of only six times in nearly 20 years that the monthly total has hit the 2 million TEU mark. If the December number holds up once actual data is available, 2020 will have ended with a total of 21.9 million TEU, up 1.5 percent from last year and breaking the previous annual record of 21.8 million TEU set in 2018.

Imports during the last half of 2020 set a string of new records, including an all-time high of 8.3 million TEU for the July-October “peak season” when retailers rush to bring in merchandise for the winter holidays each year.