Imports At Normal Levels After Ratification of Contract

“Despite some lingering labor issues, the volume of cargo and the rate of growth have both largely settled down,” NRF Vice President for Supply Chain and Customs Policy Jonathan Gold said. “There are still congestion issues to be dealt with but we’re hoping to see reasonably normal back-to-school and holiday seasons this year now that the tensions of contract negotiations are behind us.” 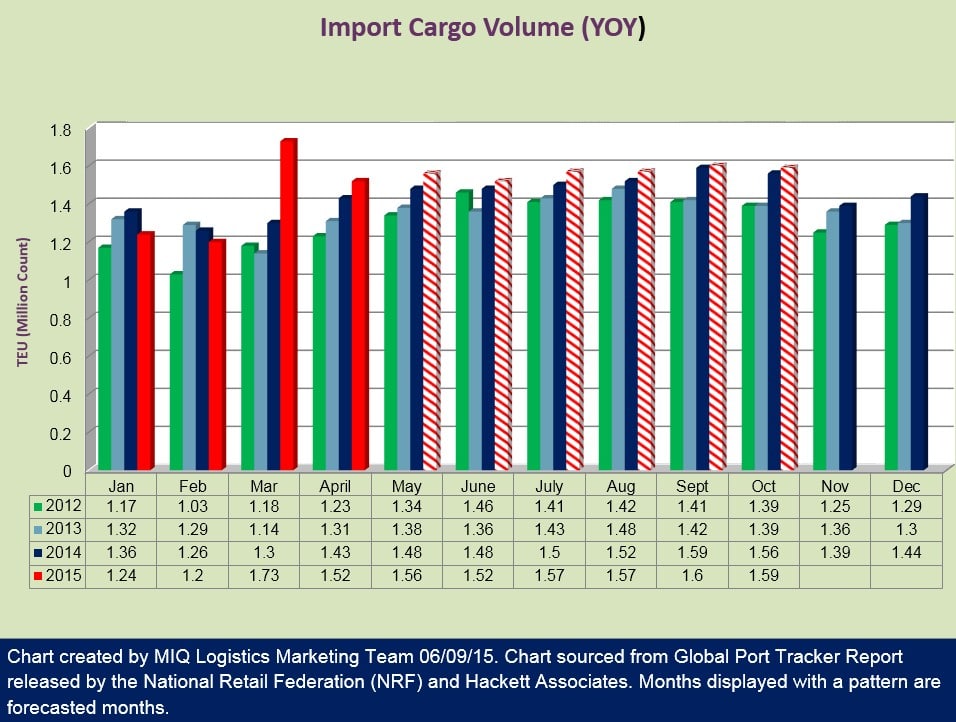 The Pacific Maritime Association and the International Longshore and Warehouse Union both voted in May toratify a new five-year contract agreed to in February. The lack of a contract and operational issues led to crisis-level congestion at West Coast ports after the previous agreement expired last July.

Ports covered by Global Port Tracker handled 1.52 million Twenty-Foot Equivalent Units in April, the latest month for which after-the-fact numbers are available. That was down 12.4 percent from March, when numbers were driven up by a surge of backlogged cargo after the labor dispute ended, but up 6.1 percent from April 2014. One TEU is one 20-foot-long cargo container or its equivalent.

The first half of 2015 is forecast at 8.8 million TEU, an increase of 5.4 percent over the same period last year.

Hackett Associates Founder Ben Hackett said a “stubbornly high” inventory-to-sales ratio after last year’s rush to bring in adequate stocks of merchandise will couple with other economic factors to affect cargo volumes through the summer.

“The West Coast recovery remains sluggish and the East Coast is not managing to hold on to the growth levels it has experienced over the past few months,” Hackett said. “June is going to be a mixed month for the West Coast with volatility between the ports, but July and August are projected to see growth across the board. On the East Coast, we are projecting growth for most ports.”