Import cargo volume at the nation’s major retail container ports is expected to increase 1.2 percent this month over the same time last year as retailers head toward the holiday season, according to the monthly Global Port Tracker report released today by the National Retail Federation and Hackett Associates.

“After supply chain worries earlier this year, inventories are plentiful this fall,” NRF Vice President for Supply Chain and Customs Policy Jonathan Gold said. “Shoppers should have no worries about finding what they’re looking for as they begin their holiday shopping.” 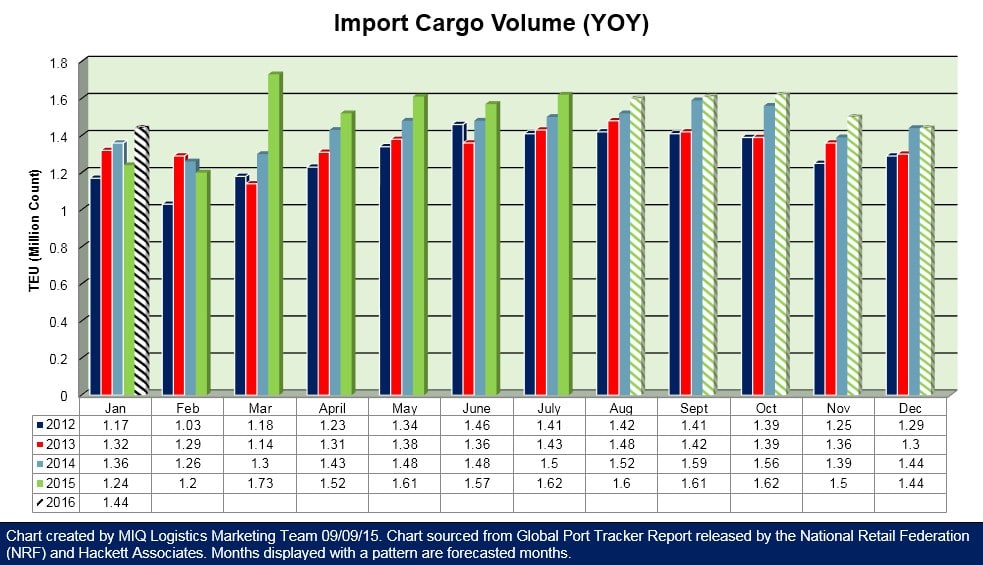 Ports covered by Global Port Tracker handled 1.62 million Twenty-Foot Equivalent Units in July, the latest month for which after-the-fact numbers are available. That was up 2.9 percent from June and 8.1 percent from July 2014. One TEU is one 20-foot-long cargo container or its equivalent.

January 2016 is forecast at 1.44 million TEU, up 16.9 percent from weak numbers seen a year earlier just before West Coast dockworkers agreed on a new contract that ended a months-long labor dispute.

Hackett Associates Founder Ben Hackett said economists have been watching a “stubbornly high” inventory-to-sales ratio this summer. But he said the cause appears to be the flood of cargo that came after the new West Coast dockworkers’ contract was signed rather than weakness in demand.

>> Click here to read the entire release from the National Retail Federation.