The Freight Transportation Services Index (TSI), which is based on the amount of freight carried by the for-hire transportation industry, fell 0.4 percent in December from November, declining for the second consecutive month, according to the U.S. Department of Transportation’s Bureau of Transportation Statistics’ (BTS). The December 2015 index level (121.0) was 27.8 percent above the April 2009 low during the most recent recession. 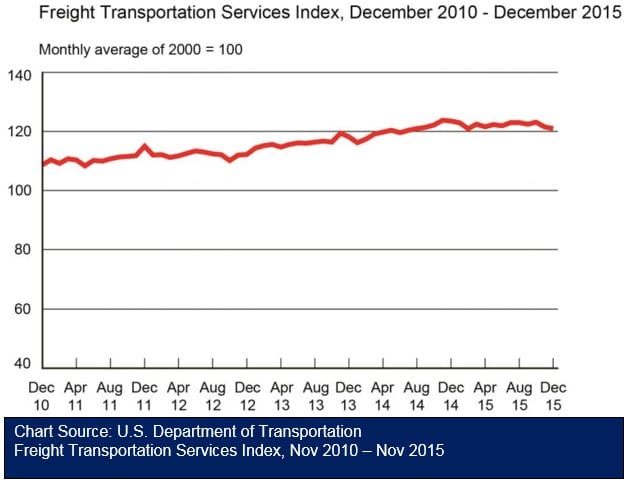 The November index was revised to 121.5 from 122.0 in last month’s release with smaller downward revisions for August through October.

Analysis: The December Freight TSI decrease of 0.4 percent from November was broad in terms of mode – all freight modes decreased except for trucking, which increased slightly. The decrease was driven by weakness in the mining (including oil and gas well drilling and servicing), utility and manufacturing sectors of the economy. The Federal Reserve Board Industrial Production index declined 0.4 percent in December while the ISM Manufacturing Index was below 50, indicating declining manufacturing activity. Housing starts were also below the November level.