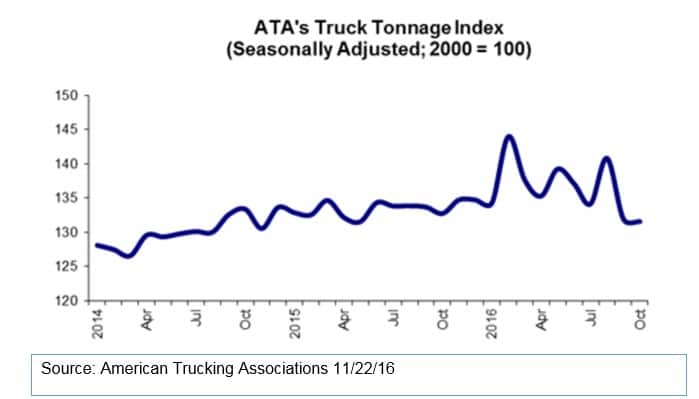 The not seasonally adjusted index, which represents the change in tonnage actually hauled by the fleets before any seasonal adjustment, equaled 138.2 in October, which was 1.9% above the previous month (135.6).

“While seasonally adjusted tonnage fell, meaning the not seasonally adjusted gain wasn’t as large as expected, the bottom of the current tonnage cycle should be near,” said ATA Chief Economist Bob Costello. “There are some recent trends that suggest truck freight should improve, albeit gradually, soon.

“Retail sales, housing starts, and even factory output all improved in October, which is a good sign. Most importantly, there has been considerable progress made in clearing out excess stocks throughout the supply chain. While that correction is still ongoing, there has been enough improvement that the negative drag on tonnage shouldn’t be as large going forward,” he said.