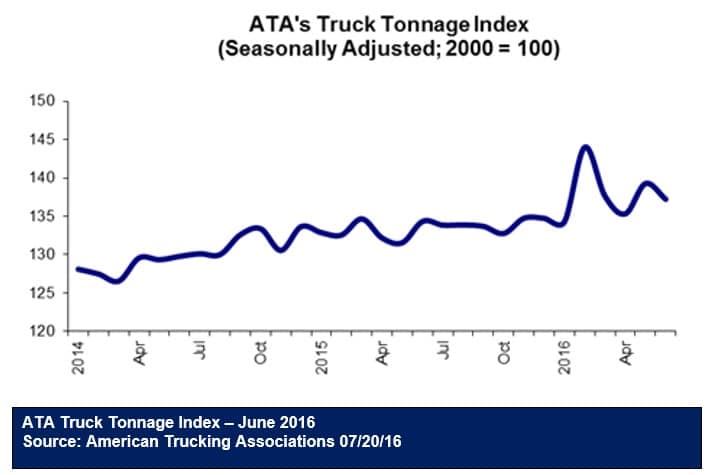 The not seasonally adjusted index, which represents the change in tonnage actually hauled by the fleets before any seasonal adjustment, equaled 142.2 in June, which was 2.2% above the previous month (139.1).

“The seesaw pattern continued again in June with tonnage falling after a good rise in May,” said ATA Chief Economist Bob Costello. “On a month-to-month basis, tonnage has been down in three of the last four months, totaling 4.7% since February.

“Looking ahead, I expect the freight environment will remain choppy. The good news for trucking is we are the most diverse mode of all freight transportation sectors between industrial and consumer freight. We are currently benefiting from the consumer side while being hurt on the industrial side. And of course we still have the inventory glut that is weighing down tonnage,” he said.

ATA calculates the tonnage index based on surveys from its membership and has been doing so since the 1970s. This is a preliminary figure and subject to change in the final report issued around the 10th day of the month. The report includes month-to-month and year-over-year results, relevant economic comparisons and key financial indicators.