American Trucking Associations’ advanced seasonally adjusted For-Hire Truck Tonnage Index decreased 4.5% in March, following a 7.2% surge during February. In March, the index equaled 137.6 (2000=100), down from 144 in February. February’s level is an all-time high. 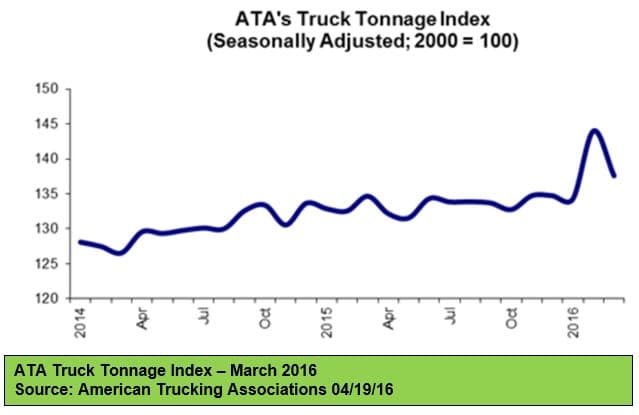 The not seasonally adjusted index, which represents the change in tonnage actually hauled by the fleets before any seasonal adjustment, equaled 142.1 in March, which was 10.2% above the previous month (129).

“As expected, tonnage came back to earth in March from the jump in February,” said ATA Chief Economist Bob Costello. “These things tend to correct, and March took back more than half of the surprisingly large gain in February.

“The freight economy continues to be mixed, with housing and consumer spending generally giving support to tonnage, while new fracking activity and factory output being drags,” he said. “In addition, freight volumes are softer than the overall economy because of the current inventory overhang throughout the supply chain.”

The decrease is the largest monthly contraction for the index since September 2012 (-5.3%).

>> Click here for the entire release from the American Trucking Association.