American Trucking Associations’ advanced seasonally adjusted (SA) For-Hire Truck Tonnage Index contracted 5.8% in September, following a 5% rise during August (a slight downward revision from our press release last month). In September, the index equaled 132.7 (2000=100), down from 140.8 in August. The all-time high was 144 in February. 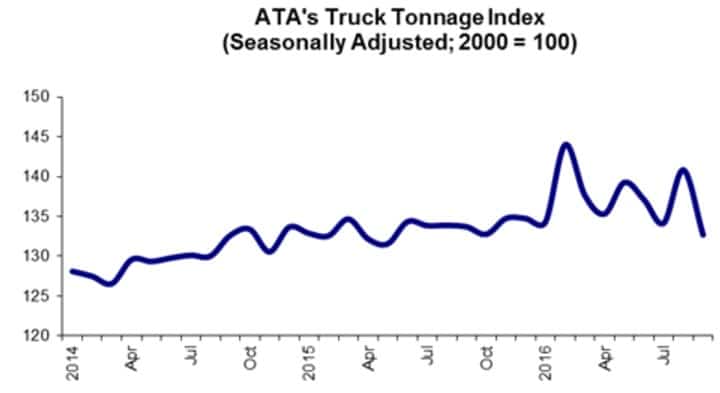 The not seasonally adjusted index, which represents the change in tonnage actually hauled by the fleets before any seasonal adjustment, equaled 136.4 in September, which was 5.1% below the previous month (143.8).

“Volatility this year continued again in September with the large drop after a significant increase in August,” said ATA Chief Economist Bob Costello. “The changes we’re seeing in typical seasonal trends are making it difficult to discern any real or clear trend in truck tonnage.

“Adjusting for the larger ups and downs this year, as well as talking with many fleets, I currently see a softer than normal freight environment, which is likely to continue until the inventory correction is complete. Looking ahead, the slow growth economic environment does not suggest that significantly stronger truck tonnage numbers are in the near term either,” he said.

Trucking serves as a barometer of the U.S. economy, representing 70.1% of tonnage carried by all modes of domestic freight transportation, including manufactured and retail goods. Trucks hauled nearly 10.5 billion tons of freight in 2015. Motor carriers collected $726.4 billion, or 81.2% of total revenue earned by all transport modes.