American Trucking Associations’ advanced seasonally adjusted (SA) For-Hire Truck Tonnage Index fell 6.2% in December, following a revised 8.4% jump during November. (November’s index was revised up slightly from our press release on December 20, 2016.) In December, the index equaled 133.8 (2000=100), down from 142.7 in November. The all-time high was 144 in February. 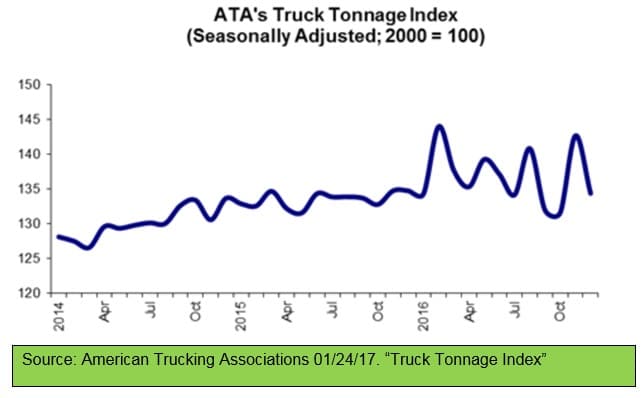 The not seasonally adjusted index, which represents the change in tonnage actually hauled by the fleets before any seasonal adjustment, equaled 133.9 in December, which was 1.6% below the previous month (136.1).

“The ups and downs that plagued most of 2016 continued in December,” said ATA Chief Economist Bob Costello. “I don’t recall a year in recent memory with so many large swings on a month-to-month basis.

“Looking ahead, there are some positive signs for truck tonnage. This includes the continued spending by consumers, larger wage gains, and solid home construction,” he said. “Factory output will continue to be soft, but it should be better this year than last year. And most importantly, the supply chain continues to make progress reducing bloated inventories, which will help truck volumes going forward.”

Trucking serves as a barometer of the U.S. economy, representing 70.1% of tonnage carried by all modes of domestic freight transportation, including manufactured and retail goods. Trucks hauled nearly 10.5 billion tons of freight in 2015. Motor carriers collected $726.4 billion, or 81.2% of total revenue earned by all transport modes.