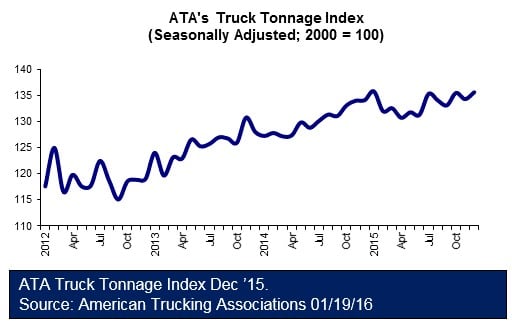 The not seasonally adjusted index, which represents the change in tonnage actually hauled by the fleets before any seasonal adjustment, equaled 132.7 in December, which was 2.9% above the previous month (129.0).

“Tonnage ended 2015 on a strong note, but it was not strong for the year as a whole,” said ATA Chief Economist Bob Costello. “With year-over-year gains averaging just 1.2% over the last four months, there was a clear deceleration in truck tonnage.

“At the expense of sounding like a broken record, I remain concerned about the high level of inventories throughout the supply chain. The total business inventory-to-sales record is at the highest level in over a decade, excluding the Great Recession period. This will have a negative impact on truck freight volumes over the next few months at least. And, this inventory cycle is overriding any strength from consumer spending and housing at the moment” he said.