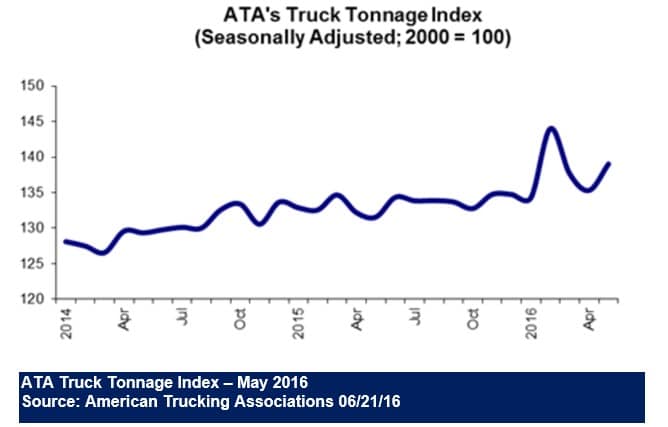 The not seasonally adjusted index, which represents the change in tonnage actually hauled by the fleets before any seasonal adjustment, equaled 138.9 in May, which was 2.4% above the previous month (135.6).

“Following two consecutive decreases totaling 6 percent, May was a nice increase in truck tonnage,” said ATA Chief Economist Bob Costello. “Better consumer spending in April and May certainly helped, but economic growth remains mixed and I’d expect the recent choppy pattern in tonnage to continue for the next quarter or two.

“We recently received good news on the inventory cycle, with the total business inventory-to-sales ratio declining for the first time in nearly a year. While one month doesn’t make a trend, this was good news for the trucking industry,” he said.

>> Click here to read the entire press release from the American Trucking Associations.