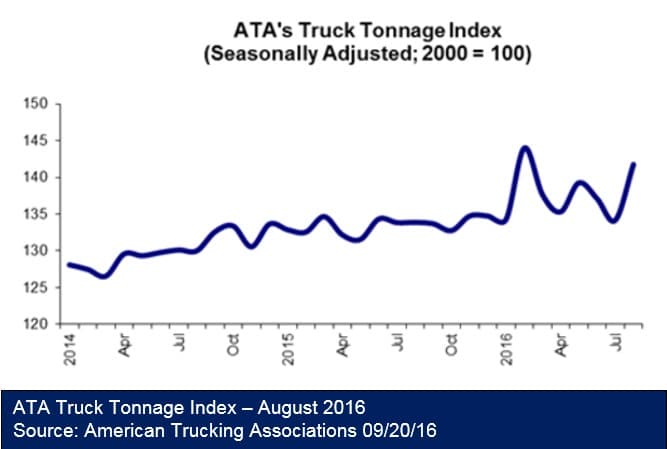 The not seasonally adjusted index, which represents the change in tonnage actually hauled by the fleets before any seasonal adjustment, equaled 144.7 in August, which was 4.8% above the previous month (138.1).

“Volatility continues to reign in 2016. This month’s tonnage reading highlights this fact and underscores the difficulty in determining any real or clear trend in truck tonnage,” said ATA Chief Economist Bob Costello. “What is clear to me is that normal seasonal patterns are not holding in 2016.”

Costello noted that during the month of August over the previous three years, the average change in not seasonally adjusted tonnage was just 0.3%. This August, tonnage surged 4.8%.

“Despite a difficult to read August, I expect the truck freight environment to be softer than normal as well as continued choppiness until the inventory correction is complete. With moderate economic growth forecasted, truck freight will improve as progress is made with the inventory overhang,” he said.

>>Click here to read the entire release from the American Trucking Associations.