“American Trucking Associations’advanced seasonally adjusted For-Hire Truck Tonnage Index was unchanged in September, following a gain of 1.6% the previous month. In September the index equaled 132.6 (2000=100), the same as in August and a record high. Compared with September 2013, the SA index increased 3.7%, down from August’s 4.5% year-over-year gain. Year-to-date, compared with the same period last year, tonnage is up 3.2%.”

“The not seasonally adjusted index, which represents the change in tonnage actually hauled by the fleets before any seasonal adjustment, equaled 135.8 in September which was 1.7% above the previous month (133.5).” 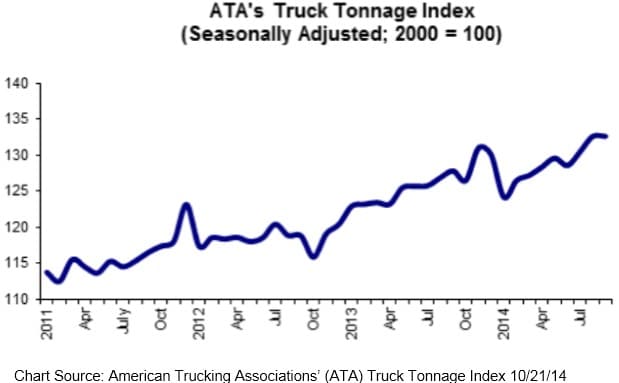 “September data was a mixed bag, with retail sales falling while factory output increased nicely,” said ATA Chief Economist Bob Costello. “As a result, I’m not too surprised that truck tonnage split both of those readings and remained unchanged.”