With Back-to-School Merchandise On The Shelves, Retail Imports Turn Toward Holiday Season

August should be the busiest month of the year for import cargo volume at the nation’s major retail container ports now that retailers have stocked up for back-to-school and are getting a head start on holiday season merchandise. That’s according to the monthly Global Port Tracker report released today by the National Retail Federation and Hackett Associates, which said cargo volume for 2016 should end the year with a 1.6 percent increase over last year. 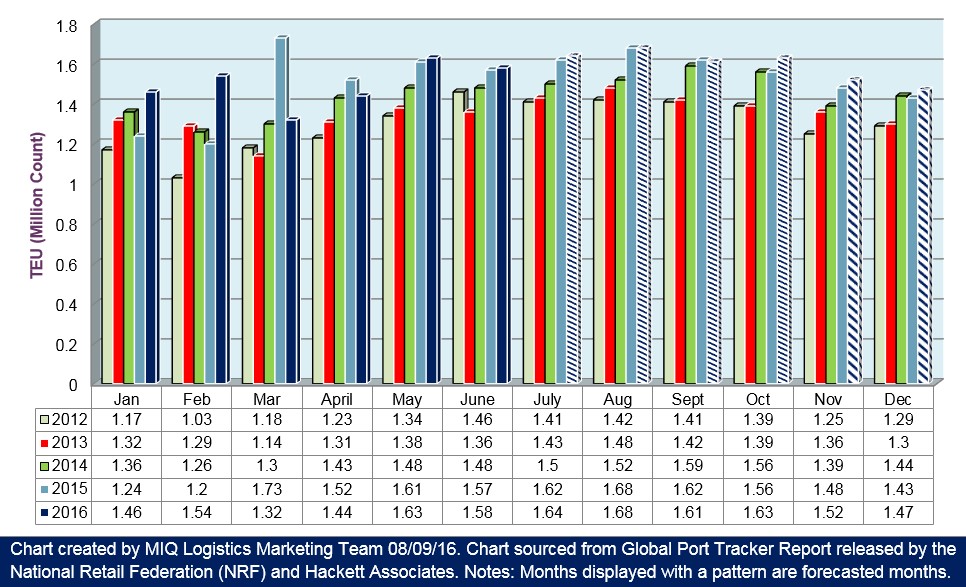 “Shoppers are right in the middle of buying back-to-school products but the retail supply chain is already preparing for the holiday season,” NRF Vice President for Supply Chain and Customs Policy Jonathan Gold said. “August is the peak month of the annual shipping season that builds up to the winter holidays, and a lot of the merchandise consumers will be buying this fall is already showing up at the docks.”

Ports covered by Global Port Tracker handled 1.58 million Twenty-Foot Equivalent Units in June, the latest month for which after-the-fact numbers are available. That was down 2.8 percent from May and 0.5 percent from June 2015. One TEU is one 20-foot-long cargo container or its equivalent.

Hackett Associates Founder Ben Hackett said much of the recent upturn in the U.S. economy is attributable to consumers, noting that the 5.1 percent increase in year-over-yearretail sales in June as calculated by NRF was nearly twice the 2.6 percent increase in averagehourly wages seen the same month.

“In these stressed times with uncertainty abounding amid an unusual presidential election and other issues, consumers have decided it is time to hit the stores and stock up on goods,” Hackett said.