The Freight Transportation Services Index (TSI), which is based on the amount of freight carried by the for-hire transportation industry, rose 1.3 percent in April from March, rising after two months of decline, according to the U.S. Department of Transportation’s Bureau of Transportation Statistics’ (BTS). The April 2016 index level (121.1) was 27.9 percent above the April 2009 low during the most recent recession. 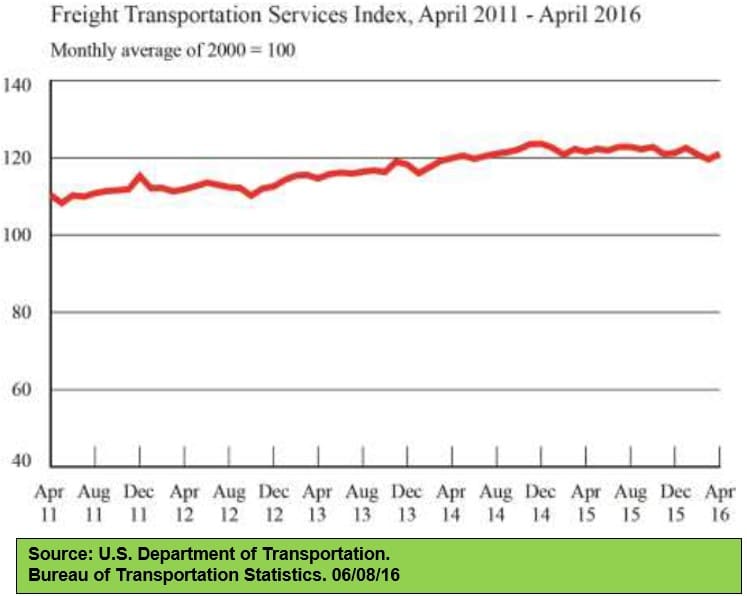 The March index was revised to 119.5 from 120.0 in last month’s release. Monthly numbers for January and February were revised down slightly as were February through December 2014.
The Freight TSI measures the month-to-month changes in freight shipments by mode of transportation in tons and ton-miles, which are combined into one index. The index measures the output of the for-hire freight transportation industry and consists of data from for-hire trucking, rail, inland waterways, pipelines and air freight.

Analysis: The March to April Freight TSI increase of 1.3 percent was due to growth in trucking and pipeline, while all other modes declined. See numbers for individual modes. The TSI
increase paralleled the increases in housing starts and in industry production. Federal Reserve Board Industrial Production index rose by 0.7 percent in April, after falling in February and
March. Most notable, there were increases in production by utilities (up 5.8 percent) and manufacturing (up 0.3 percent). On the downside, mining production fell 2.3 percent in April.
Mining employment also declined while overall employment increased. The ISM Manufacturing Index declined but remained above 50, indicating slowing but positive manufacturing growth.
Trend: The 1.3 percent Freight TSI rise in April from March, the largest increase since March 2014, brought the index back above its February level. The April level was below that of 10 of
the 12 months of 2015, and was 2.0 percent below the December 2014 index peak of 123.6. The April increase took place after two successive monthly declines – the third time since December
2013 where the index declined for two consecutive months followed the next month with a rise of 1.2 percent or more (representing three out of the four largest increases in that period). The
index remains high compared to earlier years, rising 27.9 percent since the low of 94.7 in April 2009. For additional historical data, go to TSI data.
Index highs and lows: For-hire freight shipments in April 2016 (121.1) were 27.9 percent higher than the recent low in April 2009 during the recession (94.7). The April 2016 level
was 2.0 percent below the historic peak reached in December 2014 (123.6).

Year-to-date: For-hire freight shipments measured by the index were down 0.2 percent in April compared to the end of 2015.

>> Click here to read the entire report from the Department of Transportation.