The Freight Transportation Services Index (TSI), which is based on the amount of freight carried by the for-hire transportation industry, fell 0.9 percent in March from February, falling for the second consecutive month, according to the U.S. Department of Transportation’s Bureau of Transportation Statistics’ (BTS). The March 2016 index level (120.0) was 26.7 percent above the April 2009 low during the most recent recession. 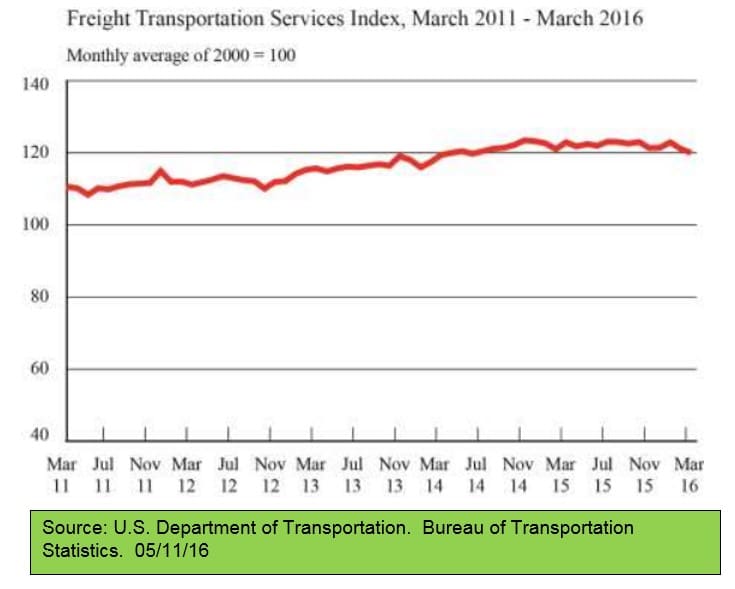 Analysis: The March Freight TSI decrease of 0.9 percent from February was broad in terms of mode – all freight modes decreased except for air freight, which rebounded after a significant decrease in February. The decrease was driven by continued weakness in the mining (including oil and gas well drilling and servicing), utility and manufacturing sectors of the economy. The Federal Reserve Board Industrial Production index(link is external) declined 0.6 percent in March, its second consecutive monthly decline. Housing starts were 8.8 percent below the February level.

The first-quarter TSI decline of 1.2 percent from the second quarter matched trends in the larger economy. Gross Domestic Product(link is external) (GDP) growth decreased to the relatively slow annual rate of 0.5 percent. The Industrial Production index also declined during the first quarter.

Trend: Following declines of 1.5 percent from January to February and 0.9 percent from February to March, the Freight TSI was 2.4 percent below its level of December 2015. The index fell to the lowest point since March 2014, 2.8 percent below the high point of November 2014. The two-month decline was the largest since January 2014. The first-quarter decline of 1.2 percent was the largest quarterly decline since the third quarter of 2012. It was the first time that Freight TSI has declined for two consecutive quarters since the first quarter of 2009, when the economy was in recession. The Freight TSI has now declined in four of the last five quarters. The index remains high compared to earlier years and has increased by 26.7 percent since its low of 94.7 in April 2009. For additional historical data, go to TSI data.