“August shipment volume increased 2.3 percent, reversing some of last month’s 3.9 percent slide. August shipments are 4.9 percent higher than a year ago and are up 13.9 percent in 2014.  The Institute for Supply Management’s August PMI rose 3.3 percent to 59, the highest level since March 2011’s 59.1, indicating that domestic manufacturing is continuing to gain strength. Driving this PMI increase were new orders, increasing by 5.2 percent, and order backlog which climbed 5.1 pcercent.”

“The August freight expenditures index dipped 0.3 percent as rates remain stubbornly flat. While capacity was not as tight as expected – and even spot rates weakened a bit during the month – August 2014 expenditures are 8.0 percent higher than the corresponding month a year ago and 10.8 percent higher than December 2013. A further increase in freight activity in September as holiday goods begin to flow into the country will strain capacity. So far, however that has not been a good indicator of higher expenditures, except on spot rate markets.” 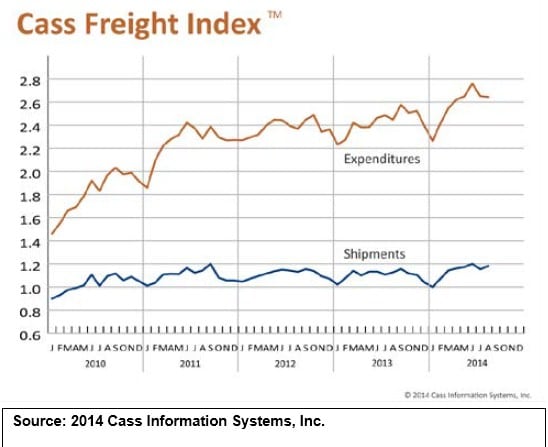 “As expected, the freight transportation market picked up again in August. Both imports and exports are trending upward, and new orders are growing in China and Europe. U.S. consumer sentiment continues to climb, signaling a developing belief that the economy will continue to strengthen. Consumer spending has inched up as the unemployment rate has fallen. The recent decline in job creation may be a temporary blip in the data since many industry segments, including construction and manufacturing, are gaining steam again after the seasonal lull from mid-June through July. Economic indicators still show hope that the fourth quarter of 2014 may not experience the dramatic drop-off that has come to characterize the economy’s performance since the recession.”