North American shipment volumes and their related costs both trailed downward in July, keeping in line with the seasonal patterns of the last five years. July is
traditionally a slow month for freight as it lies between the surges of back‐to‐school and the holidays. Although both indexes are below last year’s levels at this time,
they compare quite favorably with prior years. There should be an element of caution when comparing 2015 results to 2014 since last year was the best year the
freight sector has experienced since the recession. 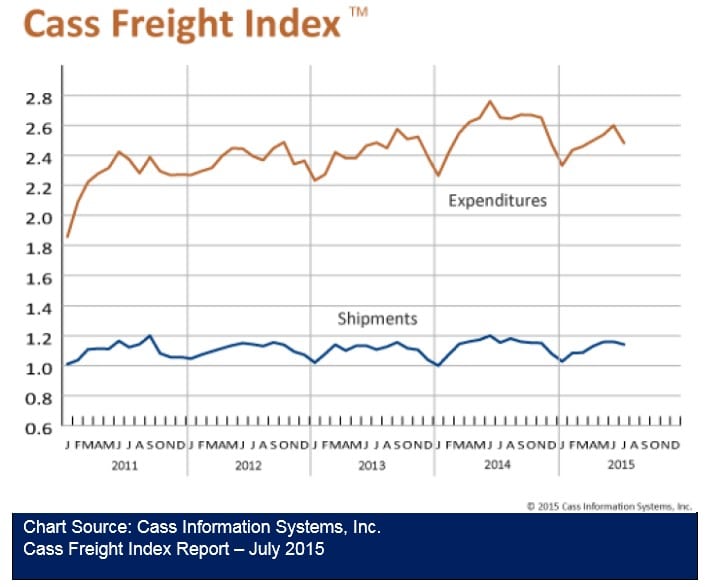 The number of freight shipments dropped 1.6 percent from June to July, following a small 0.2 percent increase from May to June. With new orders down in April and May—having slowed because inventories were high and the summer months tend to see retail sales to make room for fall and holiday stock—lower shipping volumes
naturally followed. The Association of American Railroads reported carloads up 1.8 percent and intermodal traffic down 7.4 percent in July, while the American Trucking Associations reported June truck tonnage down 0.8 percent. The Institute for Supply Management’s (ISM) Purchasing Managers Index (PMI) slid down 1.5 percent in
July; however, the New Order sub‐index rose 0.9 percent and the Production sub‐index was up 3.7 percent. The Backlog of Orders sub‐index declined sharply at ‐9.6 percent. Inventories are beginning to fall, but not fast enough should interest rates begin to rise. Year to date, the number of shipments is up 5.8 percent. If recent
trends hold true, expect a significant increase in August.

Freight expenditures fell 4.5 percent, only the second drop this year. This decline mirrored the similar sharp decline of 3.9 percent in July 2014 and was not unexpected. Although the decrease in freight expenditures was larger than the decrease in the number of shipments, the trend in lower tonnage indicates that rates are fairly
stable. Capacity pressures have eased somewhat during this lull which has kept spot rates fairly flat. The anticipated increase of freight in August and September could lead to tight capacity for trucking, but trucking companies have not been standing firm on recent rate increases.

The recently released early estimate for second quarter GDP was an annual growth rate of 2.3 percent. This is higher than some economists had forecast given the poor showing of the first quarter. (Interestingly, the revised first quarter GDP growth rate of 0.6 percent was much higher than earlier negative readings). The second
quarter rise is attributed to growth in personal consumption, another indicator that consumers are “back in the game.” Consumer spending was largely responsible for the banner year in 2014. There has been a lot of negative press about the current strength of the economy, but with many of those comparisons being against a strong
2014, it is no surprise they would not be favorable. Comparing to the previous several years demonstrates that the economy is exiting its prolonged dormant state and consumers are finally leading the way. For the remainder of the year, both imports and exports should pick up, domestic production will gain strength, and
consumers will spend.