July’s Cass Freight Index confirmed that overall shipment volumes (and pricing) are persistently weak, with increased levels of volatility as all levels of the supply chain (manufacturing, wholesale, retail) continue to try and work down inventory levels. That said, there have been a few areas of growth, mostly related to e-commerce, with lower levels of expansion being experienced in transit modes serving the auto and housing/ construction industries. All of this added up to slightly lower shipment volume in July, the seventeenth straight month of year-over-year decline. 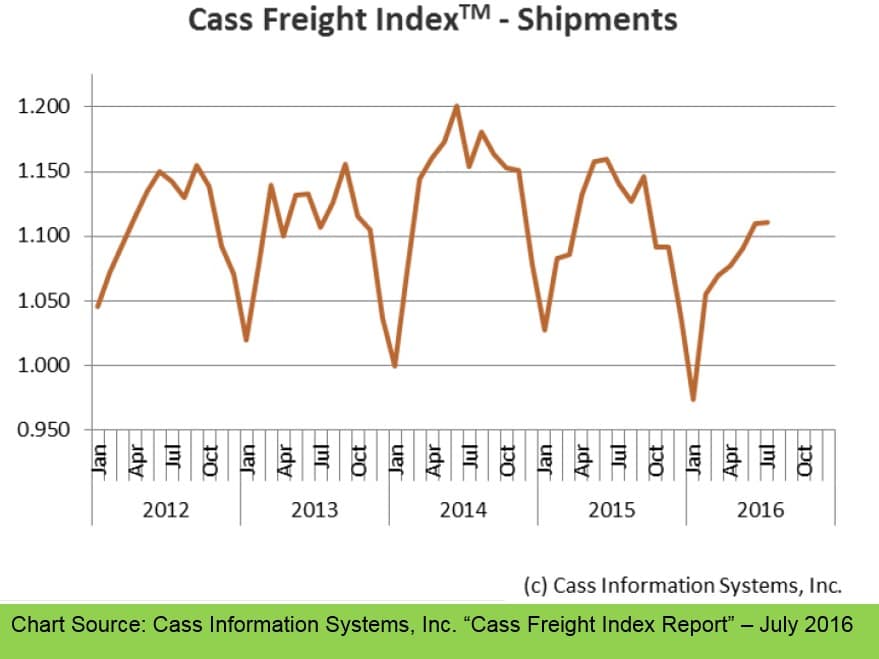 The U.S. economy continues to be in a state of transition. After the explosion in fracking activity (pun intended) drove the first industrial-led recovery (2009-2014) in the U.S. since 1961, we have been patiently waiting for the consumer to take the baton of leadership in economic growth. Fracking in the U.S. has been so successful that it drove the worldwide price of crude down and positioned the U.S. globally as the world’s single largest oil producer. It also drove the North America price of natural gas to record lows not seen since the 1999 El Nino-induced levels. With the dramatic drop in crude and natural gas prices, the financial incentive to drill and frack additional wells also dropped, and the U.S. slipped into an industrial recession in March 2015. Nearly all of us practicing the dismal science of economics began predicting in the Spring of 2015 that as the price of oil and natural gas fell, the consumer would take the increase in disposable income—created by the decreases in the costs of their daily commute and heating and cooling their house—and spend it. Why? Because since the end of World War II, the greatest predictor of consumer spending, expansion or growth, was the expansion or growth of consumer disposable income. But instead of following the playbook, most U.S. consumers have been choosing to pay down debt and increase their savings rate. Simply put, the consumer has not yet picked up where the industrial economy left off.
Inventories have now contracted from GDP for five consecutive quarters to the tune of ~3% of GDP. This is the longest stretch outside of a recession since 1956-57 and the largest in magnitude since 1995. We expect de-stocking to continue into Q3 in retail, based on the NRF’s (National Retail Federation’s) Port Tracker survey. We remain concerned about elevated levels of cars on dealer lots, and we acknowledge continued efforts to streamline finished inventory in most machinery sectors. Overall inventory levels remain elevated compared to sales, but with further improvement on many ratios in ‘2H (which we expect), and unless demand takes another step down, we believe the persistent drag of de-stocking should progressively lessen as we enter 2017.

We continue to assert the trucking industry provides one of the more reliable reads on the pulse of the domestic economy, as it gives us clues about the health of both the manufacturing and retail sectors. We should note that as the first industrial-led recovery (2009-2014) since 1961 came to an end, and the shift from ‘brick and mortar’ retailing to e-commerce/omni-channel continues, we are becoming more focused on the number of loads moved by truck and less focused on the number of tons moved by truck. Tonnage itself appears to be growing (three-month moving average +2.75% not seasonally adjusted, +3.24% seasonally adjusted). Counter to this, truck loads have contracted on a YoY basis three out of six months in 2016, with June posting the worst comp since December 2012 (-4.4%). No matter how it is measured, the data coming out of the trucking industry has been both volatile and uninspiring.

FREIGHT EXPENDITURES
Freight payments declined 5.1% in July on a YoY basis. This ongoing weakness, also in its seventeenth straight month of decline, is being driven by a number of factors. In part, this weakness is driven by the excess of capacity in most modes: trucking, rail, air freight, barge, ocean container and bulk. The weakness is also driven in part by the ongoing decline in diesel and jet fuel and corresponding fuel surcharges that influence pricing realized by shippers. Although at first blush it appears that in most modes the gap between spot pricing and contract pricing appears to be closing slightly, this is more a function of slight declines in contract pricing than it is a function of improvements in spot pricing. We intend to dive far deeper into the pricing side of the equation in coming months, but see little reason to predict a change in course or material strength in either the contract or spot rates for most modes. Exceptions to this do remain in the parcel marketplace and forms of expedited transit supporting e-commerce.

OVERALL PICTURE
Ex auto industrial production trends did start to flatten out in Q2 (improving to up 0.2% in Q2 from down 1.2% in Q1). We see this largely as a return to more normal seasonal production patterns than anything else. Overall industrial production continues to track between 0 and +1% thanks to the lift from autos and nondurables (goods consumption picked up in Q2 as seen in the GDP data). However, we are concerned that elevated inventories on dealer lots, along with slowing sales, will lead to U.S. auto production growing less than 1% on a YoY basis in Q3. Thus, we are now anticipating ‘2H manufacturing industrial production to be flat YoY, down from our prior hopes of a modest recovery into the up 1+% range.
On the consumer side of the equation, we do see some signs of hope—especially for those retailers with a strong e-tailing or omni-channel offering. With the price of oil and natural gas remaining low, we see little reason to predict a resurgence in fracking or the many types of industrial activity that fracking drives. Obviously, this would also mean that the consumer would continue to enjoy improved disposable income. As we have pointed out, the U.S. consumer has been saving and paying down debt with this disposable income for over six quarters. By this holiday season, we expect them to begin to spend at least part of their income. If not, the risk of an overall recession grows.