North American freight shipments continued to rise in April, although at a much lower rate than earlier in the year. This slowdown mirrors the slowdown in the economy. Expenditures for freight were up marginally. The number of new jobs created fell in April as the unemployment rate hit a one-year high. Hiring for manufacturing, which declined in March, stalled, while construction jobs also fell off. These are signs that businesses are holding off on hiring
because of the perceived weakness in the economy. Manufacturing declined in April and remains weak. 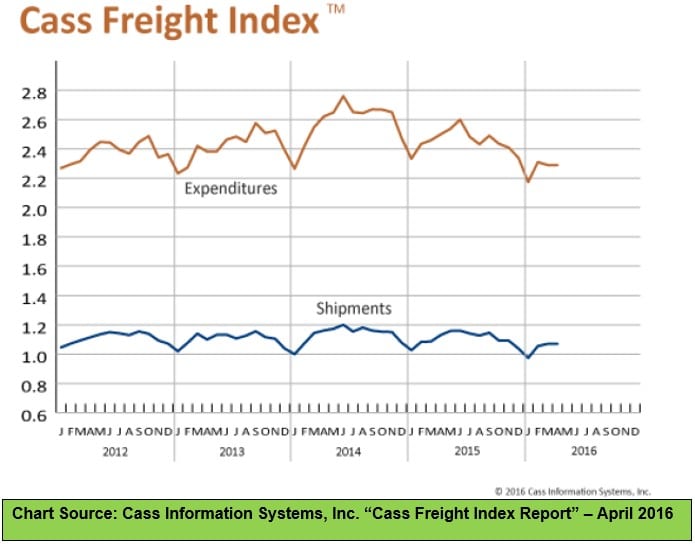 The April freight shipments index increased a meager 0.7 percent from March. The first four months of 2016 were a departure from the more robust growth we’ve seen in the same period for the last five years. The April 2016 freight shipments index is 4.9 percent lower that for April 2015. April railroad shipments reversed the 22.2 percent increase in carloads from February to March, dropping 21.1 percent. April intermodal shipments followed suit, declining 17.8 percent after a rise of 19.2 percent in March. The March truck tonnage figure dropped 4.5 percent, erasing about half of the February gain. February was an all-time high for the American Trucking Associations’ monthly Truck Tonnage Index. In April, the Institute for Supply Management’s PMI Index declined 1.9 percent, a setback after four months of slow, but steady growth. New orders declined almost 4 percent. Interestingly, the only industry reporting a decline in new orders was textile mills. This is probably due to high inventory levels of retail goods, including clothing. Production fell almost 2 percent, with decreases in textiles and petroleum and coal production. The backlog of orders also declined about 1 percent. May is usually a relatively strong month for freight shipments, but given the high inventories with ever slower turnover rates and the decline in new production orders, May could be another soft month.

North American freight payments rose 0.2 percent in April. With freight shipments up 0.7 percent, this indicates that rates are very soft. With ample capacity available across the modes, competition for loads is holding rates down. The April 2016 index is 8.3 percent lower than in April 2015.

The U.S. economy decelerated in the first four months of 2016. The slowdown was caused by the continued decline of the global economy; the reticence of the consumer sector to increase its buying; the loss of jobs and income from the plunging oil costs (which shut down the fracking business and cut back on coal shipments); very high inventory levels across the entire supply chain; and poor export figures due to both the strength of the U.S. dollar and a decline in worldwide demand. Eyes are on the Chinese economy, which has been extremely unstable and can have a big effect on world economies if it continues to falter. Based on the trends of many economic indicators, it appears the economy may get worse before it gets better.