Both the number of shipments and freight transportation expenditures continued their downward slide in December, falling 4.9 and 2.7 percent respectively. The declines are not unusual for December, but they capped off a second quarter of decline. In retrospect, 2015 did not even begin to reach the heights we reached in 2014. By the end of
2015, both shipment volume and expenditures fell back to 2013 levels. Expenditures for freight transportation were 5.2 percent lower than at the end of 2014 and shipment volume was down 3.7 percent from the same period. 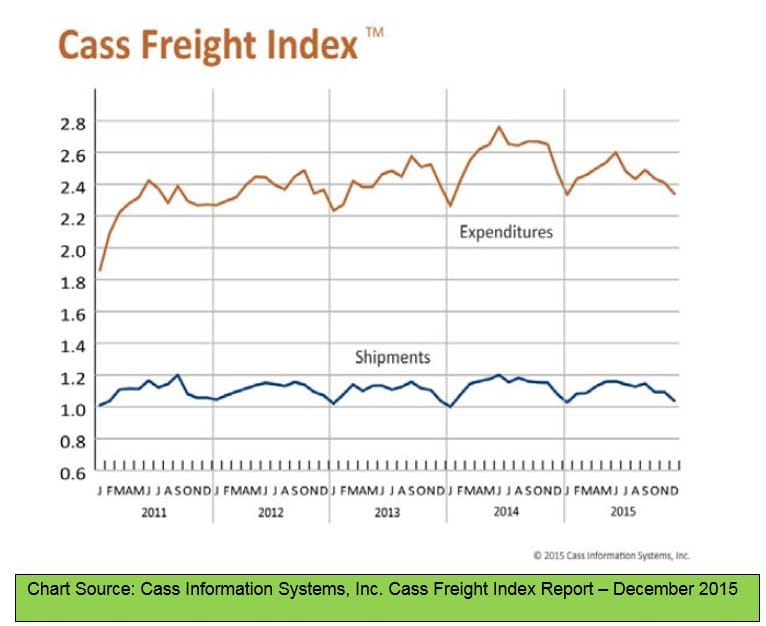 Freight shipment volume declined 4.9 percent in December. However, this year‐end drop is not as big as the more than 6.2 percent declines in December 2013 and 2014. Holiday season retail store sales were strong, but did not meet expectations in 2015. Online sales blew past last year’s record and more than made up for lower brick and mortar sales. The discounting started early again this year, muddying Black Friday sales figures, and consumers waited until goods were marked down further before buying. The holiday season was especially a boon for small parcel carriers.   The Department of Commerce reported a 1.1 percent drop in retail trade in December and an 8.2 percent rise in sales for food services and drinking establishments. Consumers remained cautious about extending any new credit for holiday purchases, waiting for the best bargains. Retailers had hoped the extra cash generated by still‐ falling gas prices would boost sales, but instead consumers increased their visits to restaurants and similar businesses. The Institute of Supply Management’s (ISM) PMI fell again for the second month and the index level has fallen below 50, indicating that the manufacturing sector is contracting. The Production, New Orders and Backlog of Orders sub‐indexes are also below 50 and are contracting; however the New Orders sub‐index did increase 0.6 percent to 49.2.

Freight payments fell for the third month in a row, dropping 2.7 percent. This follows a seasonal pattern and aligns somewhat with the drop in shipments. It also reflects falling spot rates caused by excess capacity. There was an increase in spot rates in the week leading up to Christmas, but this was not enough to offset lower expenditures due to lower volume.

Despite favorable employment/unemployment reports and moderate growth in household wealth and income, consumers are still very conservative. There was little expansion in credit and higher savings rates. In general, consumer sentiments have remained in the 90s most of the year, but trailed downward in the third and fourth quarter. Companies are laying off seasonal workers and many are even going beyond that. Macy’s just announced a downsizing that will affect close to 5,000 employees and will see the closing of some of their flagship stores. Expect unemployment to rise again in the first quarter of 2016. High inventories are a problem for retailers, wholesalers and manufacturers, so a majority of goods were discounted. The Federal Reserve raised interest rates in December, which puts more pressure on firms holding inventory. Inventory carrying costs rise with interest rates, and the money tied up in inventory that is not moving becomes a liability. And this may get worse, as the Fed has discussed plans to raise rates several times in the coming year. Low warehouse vacancy rates are pushing the price of warehouse space. In short, the nation’s bloated inventories are becoming a problem. Export demand was way off in 2015 because of global economic conditions and the relative strength of the U.S. dollar, which makes our goods more expensive. Global conditions are slowly stabilizing, so expect a strengthening in U.S. exports, excluding oil, in 2016. However, the U.S. dollar shows little sign of falling off in the near term.