North American shipment volume jumped up in February, while total freight expenditures reversed a three- month slump. The problems caused by labor negotiations on the West Coast have contributed to an economic slowdown for most of the first quarter. The two sides in the ILWU contract negotiations have come to terms, but not yet ratified them, which will open the floodgates to moving the backlogged freight. The Port of L.A. estimates that it will take three months to return to normal. Meanwhile congestion and capacity will be the industry’s buzzwords.

The number of shipments increased 5.5 percent in February and is 0.9 percent higher than the same month a year ago. February’s frigid temperatures and snow that covered much of the country led to increased shipments of heating oil and coal and sand. In addition, the railroads have reported increases in grain shipments for the last

two months. The American Trucking Associations reported that truck tonnage rose 1.2 percent in January (the latest month available). The containers backed up in the West have impacted rail intermodal traffic, which was down 7.6 percent in February. East Coast ports have been reporting record January container loadings, but there has not yet been a significant shift to other ports. Since the contract dispute has been settled, shipment volume will pick up significantly in March and April. Union Pacific and Burlington Northern have already reported on the negative affect the strike is having on their bottom lines and have expressed concerns about the system’s ability to handle the demand that is expected when freight shipments resume. 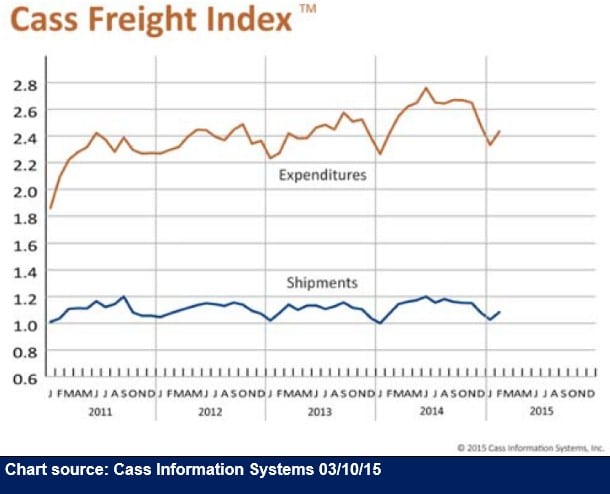 Freight expenditures were up 4.3 percent after declining for three months, and were up 0.6 percent over February 2013. Widespread rate increases have not yet taken hold and spot rates have been flat or down throughout the month, so the increase in freight expenditures is largely due to the increase in freight shipments. Expect rates to rise in March as both rail and truckers deal with the herculean task of transporting the goods from the West Coast.

The slow start to 2015 should not be viewed as a concern. In 2014, the weather caused a disruption similar to the West Coast port problems, but once those were resolved the economy began to heat up. The recently settled ILWU contract came after a prolonged nine-month series of slowdowns and port closures, causing a freight gridlock. The conflict will cost retailers as much as $7 billion in increased carrying costs and lost sales. Much of the undelivered freight will be discounted immediately upon receipt because it is no longer in season, which will contribute to mounting inventories. New orders and production are still strong, as is consumer confidence, so we should expect this slowdown to be a temporary blip.