The number of North American freight shipments in February shot up 8.3 percent from January, erasing January’s decline, while expenditures for freight shipments gained 6.3 percent (not quite overcoming January’s drop). The strong growth in freight in February is the expected trend, but the recent four-month slide in freight traffic put the starting point for 2016 significantly lower than in the last several years. Economic growth slowed more than expected in the fourth quarter of 2015 and continued into January. The robust turnaround this month signals improvement, but current economic conditions do not support a robust rebound. Global markets are still weak—especially with China’s economic turmoil—which is reducing demand; the U.S. dollar remains strong, making our export goods more expensive on world markets; consumers are in a stronger position with positive income growth, but still remain conservative in their spending; and more growth has been seen in the purchase of services (eating out, hotels, airfare, movies, etc.) rather than goods purchases. Inventories remain very high in the goods sectors, which has reduced imports and domestic manufacturing. 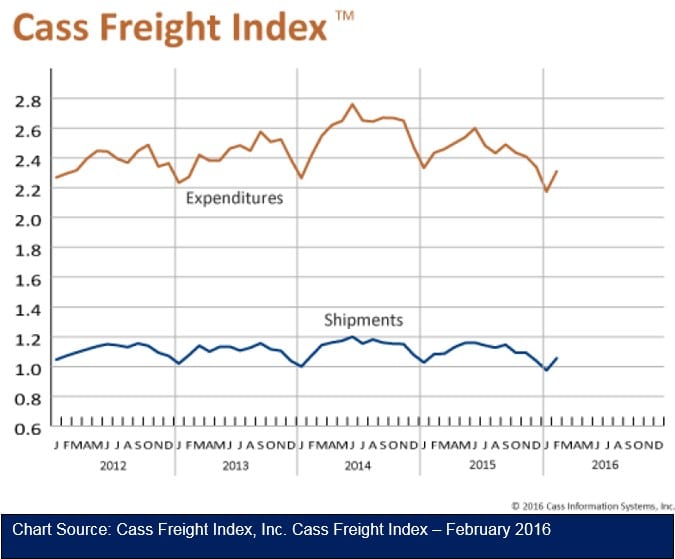 SHIPMENT VOLUMES
The freight shipments index rose 8.3 percent to 1.055 over a revised January index of 0.974. February 2016 is 2.6 percent lower than the same month in 2015, an improvement over the similar negative 5.2 percent in January. The February increase was expected and it reversed a four-month slide in the shipments index. Railroad carloadings rose 1.1 percent in February after plummeting 20.6 percent in January. Carloadings continue to be hampered by declining coal shipments. Carload traffic rose for motor vehicles and parts, miscellaneous carloads, and waste and nonferrous scrap. Intermodal, on the other hand, rose only 0.9 percent in February, following an 11.9 percent dip in January. The weakness in intermodal is indicative of the faltering manufacturing sector, bulging inventories and weak container shipments at the ports. Surprisingly, truckload tonnage was at all-time high in November and December 2015—according to the American Trucking Association—and fell only 1.4 percent in January. The volatility in the energy markets, as well as fragile economic conditions worldwide, has introduced a strong element of uncertainty into future freight growth in the U.S. The Institute for Supply Management (ISM) reported that February marked the fifth consecutive month that manufacturing sector economic activity in the U.S. contracted. The ISM’s PMI index of 49.5 showed that despite the growth of 2.7 percent in February, the index remained below the 50 percent point delineating growth or contraction. Indicators that the economy is not slowing to a halt are evident in several of the PMI sub-indexes. For instance, the production index was up 5.2 percent, the backlog of orders index jumped 12.8 percent, and the new order index held steady.

FREIGHT EXPENDITURES
Freight payments rose 6.3 percent in February following a revised fall of 7.3 percent in January. The strong upward swing in February is the expected trend, but the 2016 increase is much stronger than the January to February change of 4.3 percent in 2015, and more in line with the 6.8 percent month-over-month change in 2014. The strong growth in the number of shipments accounts for most, if not all, of the rise in the expenditures index. Actual increases in the cost to ship are difficult to find as capacity is relatively easy to acquire, fuel prices have been steadily dropping, and the market seems unwilling to bear rate increases at the moment. Spot market prices have been steady as well.