North American shipment volumes and total spending on freight both dropped in January, following the pattern we have come to expect in the almost six years since the end of the Great Recession. Overall, the economy was much stronger in 2014, although the strong GDP growth of the second and third quarters was capped with more modest growth in the fourth quarter. The continuing labor and capacity woes at West Coast ports had an impact on shipment volume late in December, which is reflected in the January 2015 indexes. 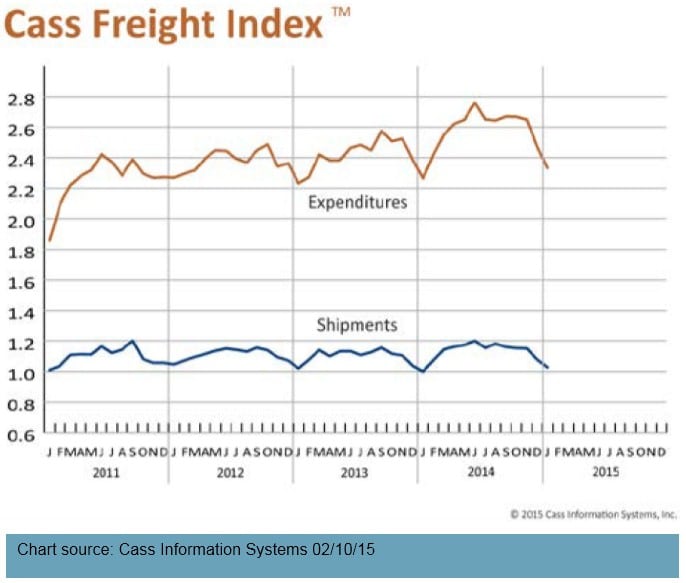 The number of shipments fell 4.7 percent from December, but was 2.7 percent higher than the same month a year ago. In fact, the January 2015 shipments index is the highest start since January 2012. The American Trucking Associations reported that the growth in tonnage was flat at year-end. U.S. railroads have experienced some substantial increases in carloads and intermodal recently. The Cass Freight Indexes, however, did not capture a portion of these increases because the big growth occurred in commodities such as coal, sand and grain, which often move in large bulk or dedicated unit train moves. This type of move is generally not prevalent in the index database.

Freight spending has been falling for three months, dropping 5.7 percent in January. Much of the decrease can be attributed to the fall in the number of shipments, while also partially due to the weak freight market which held rates in check. Despite being lower than 2014 year-end, January 2015 is the highest January index level on record for expenditures. With carriers gaining more control over rates and capacity tightening, total freight spend in 2014 was higher than in any preceding year. As long as capacity remains precariously balanced, we will continue to see a slow trend upwards. But when the economy picks up later this year we should see a steeper rise in total dollars spent, reflecting higher freight rates. It is important to note that freight volume has not yet returned to pre-recession levels, but that spending on freight is substantially higher than it was in 2007.

The Institute for Supply Chain Management’s PMI for production declined 2.9 percent in January, but this drop is not unexpected for January. Two sub-indexes, New Orders and Order Backlog, also dropped – 8.5 and 12.3 percent respectively. A continued decline in these indexes would signal more than a temporary drop in shipments to be expected in coming months.