The number of freight shipments and the dollars spent on freight have been in a typical seasonal decline since September 2015. Our shipment index opened the year just 0.2 percent below last January, while the expenditures index is down 1.4 percent. The economy grew much more slowly in the second half of 2015, so January freight shipments are down 11.6 percent and dollars spent are down 11.5 percent from the June 2015 high. The declines in the fourth quarter and again in January are normal seasonal trends and are not necessarily signs of further weakening. 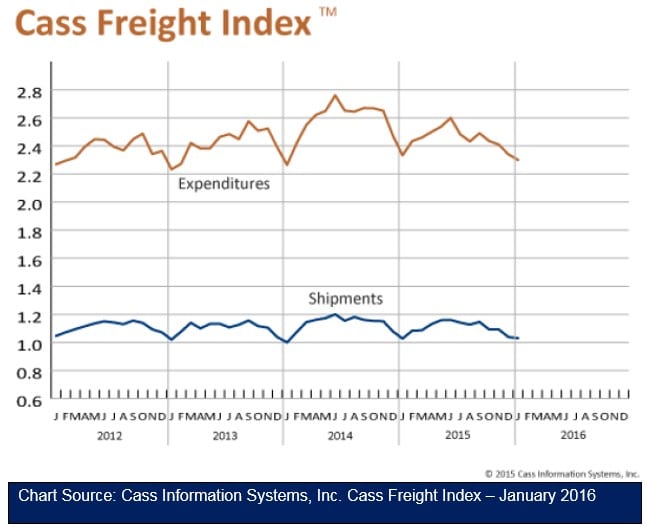 SHIPMENT VOLUMES
Year over year, freight shipments were essentially flat from last year, just 0.2 percent lower than last January. Sequentially, January was the fourth month in a row that the number of freight shipments declined. The Association of American Railroads (AAR) reported that carloads were down 20.6 percent, while intermodal loadings fell 11.9 percent over December 2014. The AAR attributed the decline to soft economic conditions in the U.S. and globally. The continued steep decline in energy prices hurt the railroads on several fronts in January. First, it caused a dramatic decline in coal shipments, one of their primary commodities, as power generating plants continue to shift to less expensive natural gas. Second, a drop in petroleum and petroleum products shipments as oil mining came to a virtual standstill in the U.S. And third, there has been a loss of shipments of materials used in petroleum extraction. Truck tonnage also eroded in January, but not to the same extent as railroads. Carriers are reporting that capacity and demand are very well matched right now.

FREIGHT EXPENDITURES
The freight payment index fell 1.9 percent in January (from December), and is 1.4 percent below the January figure in 2015. The decrease in January 2016 is much less than the December to January drops of 5.7 percent in January 2015 and 5.1 percent in January 2014. The decrease can be mainly accounted for by the drop in the
number of shipments and the mix of commodities moved. Generally speaking, rates were stable in January because available capacity was not a problem.
OVERALL PICTURE
The Institute of Supply Management’s (ISM) monthly PMI Index Report in January showed that although the PMI Index remained below the 50 percent threshold—indicating that manufacturing is contracting—the index rose for the first time in four months. The 0.4 percent increase is a sign that manufacturing may be reawakening. The Production Sub-index rose 0.6 percent, along with a healthy 5.5 percent increase in the New Order Sub-index. If manufacturing continues to grow—and it should—freight levels will return. Although factory employment has been hit hard by weak exports, job hires were up 29,000 in January. The Labor Department released figures recently showing another decline in unemployment, which fell to 4.9 percent. Even better news for the economy is that there was a half a percentage point gain in average hourly earnings in January. This, coupled with the growth of wages in the second half of 2015, should increase consumer spending, giving the economy another boost. Wages have grown more in the last six months than in any other time since the recovery began over six years ago. The number of new jobs created in January was
much lower than in December, but much of this is due to the hiring of seasonal workers.