June shipment volume and payments continued to move up, even as the economy overall has been weakening. 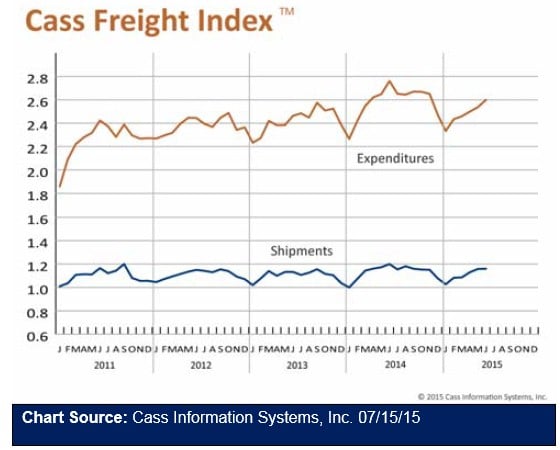 The 0.2 percent rise in the number of shipments was the smallest this year. Manufacturing was very weak for the first half of 2015, but started to recover in June. First quarter orders were sluggish because of both bad weather and shipments that got tied up in the West Coast port problems. The strength of the U.S. Dollar in world markets has severely curtailed exports, which has contributed to the drop in manufacturing. The Institute for Supply Management (ISM) PMI increased 1.3 percent in June. The Production Index declined 0.9 percent in June, but should be picking up given the 1.3 percent rise in New Orders. Railroad carloadings rose 1.2 percent and intermodal traffic was up 2.9 percent in June. The Association of American Railroads reported that the June intermodal figure of 1,117,149 containers and trailers was the highest in history. Looking at trends from the previous several years, the June growth is on par (if you exclude last year, which was an exceptional year for freight). In fact, June’s freight shipment index is 3.4 percent lower than June  2014.

Freight payments jumped 2.4 percent in June, but were still 5.8 percent lower than June 2014. Freight payments have increased 5.1 percent since the beginning of 2015, less than the 7.6% increase in the number of shipments. This indicates that rates have not been rising substantially. Capacity has been keeping pace with the increase in shipment volume so there has not been significant pressure on rates. At just below one hundred percent capacity utilization, the trucking industry is still walking a delicate tightrope, but carriers are reporting that they are reluctant to give up a good customer because of rates and are settling for lower rates.

The economy is still tepid, but freight is improving despite the slow growth. As we head into the second half of the year, expect a leveling off or even a drop in July shipment volume. This is traditionally a slow month. Things will begin to pick up again in August as we head into school and then holiday shipping. No remedy is expected from the Federal Reserve to lower the strength of the dollar, so exports will continue to be very weak. The same dollar strength makes import goods more attractive for the U.S. consumer because of the increased buying power. The just‐completed nuclear deal with Iran will lift the sanctions against Iranian oil, so that should begin to flow again. This will dramatically lower the price of oil and give consumers some extra cash in their pockets, which should translate to stronger retail sales in the latter part of the year.