Freight shipments slowed to only a 1.4 percent rise in March, following an 8.3 percent jump in February. Expenditures for freight declined 1.0 percent in March—reversing a portion of the 6.3 percent increase in February. Manufacturing and building construction have been on an upward trend and have just started showing up in the supply chain. 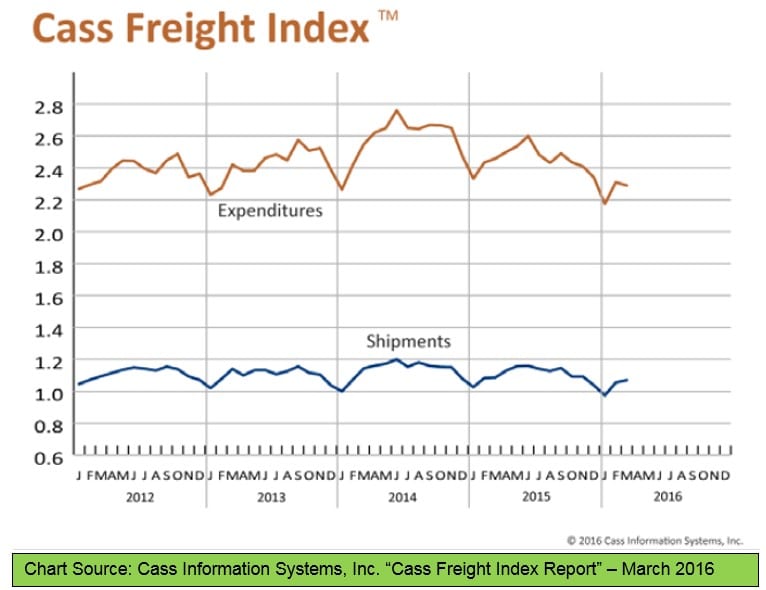 Shipment Volumes
The March freight shipments index rose 1.4 percent, but still remains 1.5 percent below the same month a year ago. March shipments have grown at a slower pace than each February for the last couple of years, so this is not unexpected. The March 2016 index is still 6.2 percent lower than the December 2015 index, indicating that the plummet in January is going to take quite some time to dig out of. On an average basis, the first quarter of 2016 was 3.0 percent lower than the same period in 2015. The Institute for Supply Management’s (ISM) PMI index continued to move up in March, posting a 4.6 percent rise. Notably, the index has just passed back over the 50 index level, indicating growth, for the first time since August 2015. This is the third consecutive month of growth and is a sign that manufacturing may finally be recovering from its slump. High inventories are still a big concern and will moderate future growth. Both the New Orders and the Order Backlog sub-indexes increased, 13.2 and 5.2 percent respectively. This should translate to higher production in April. One cautionary indicator though: the manufacturing sector cut 29,000 jobs in March. Railroad shipments picked up remarkably in March with a 22.2 percent rise in carloads and a 19.2 percent rise in intermodal shipments. These follow double digit drops in February. March figures for truck tonnage are not yet available. Expect sluggish but sustained growth in freight.

Freight Expenditures
Freight payments declined 1.0 percent in March on the heels of a strong 6.3 percent growth in February. The decline is a departure from the trend seen in recent years. Capacity was not an issue for any of the modes in most places, so spot prices were flat or down. Railroads instituted price increases often in 2015—matching the need for their services—but have been slower to do so in 2016. Tariff rates for some goods are scheduled in increase on April 15th. Truck rate changes have been extremely moderate and most shippers are not expecting much of a change in the first half of 2016. Slow economic growth is not a good environment for rate increases. After falling to the lowest levels in recent history in February, diesel prices are creeping back up, rising 4.6 percent in March.

Overall Picture
By some measures the economy appears to be in good shape. March employment figures were strong, especially for construction, which gained 37,000 jobs, and retail, which gained 48,000. Average hourly wages grew by 7 cents an hour, housing starts and home sales had moderate growth, inflation is low, and February exports were up 1.5 percent. On the downside, consumer spending has been sluggish; business investment has been weak; unemployment went from 4.9 to 5.0 in March; new building permits declined in April; the dollar remains robust in world markets (hurting our export prices); and, finally, the Federal Reserve is divided on the next course of action. At their March meeting, the Fed chose not to raise the interest rate, but they have said they are planning two increases this year, timing TBD. Global economic conditions are still weak and fragile in some economies, adding a level of uncertainty to the U.S. economy. 2016 is turning out to be difficult to predict. Anecdotally, however, many players in the supply chain remain cautiously optimistic for the rest of the year.