Although North American freight shipments continued to climb in May, they are still well below those of the last several years. Expenditures for freight fell for the third time in five months. The
current economic outlook is volatile, which has led to slow uneven growth. What is perceived as a strong sign one week often looks like a sign of economic weakness the next. Even the Federal
Reserve is having difficulty pinning down the direction and strength of the economy. At their June 15 meeting, they lowered their economic growth projection from 2.2 percent to 2.0 percent. The global economy is facing many unsettling influences, such as Britain’s possible exit from the EU, China’s economic woes and currency problems, and oil prices. 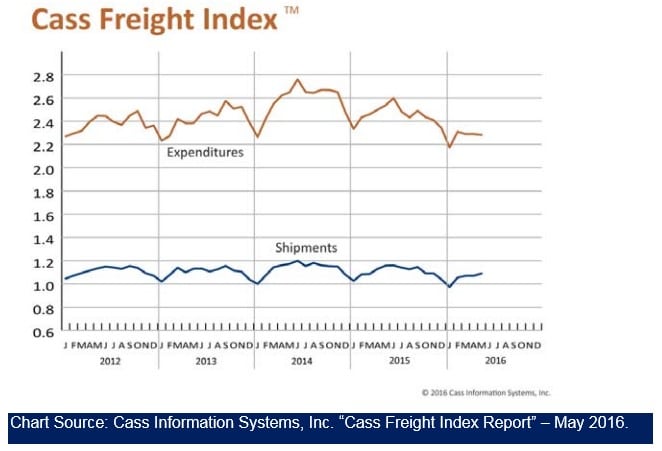 Shipment Volumes
The May freight shipments index rose 1.3 percent from April. This represents the high point so far for 2016, but it was still 5.8 percent below May 2015 and 7.0 percent lower than May 2014. This year we have failed to see the robust growth in shipments that we expect to see this time of year. In May, railroad carload shipments and container shipments were up 1.9 and 2.1 percent respectively. The Association of American Railroads (AAR) reported that May carloads were 10.3 percent lower than in the same month in the 2015, while intermodal container shipments were
3.3 percent lower than last year. Truck tonnage continues to slide for both linehaul and spot markets. Port activity improved slightly in May, but not enough to contribute to a great increase in domestic movements. Industrial production dropped 0.4 percent in May, with the biggest declines in manufactured goods, especially autos. The decline was much larger than had been forecast. The Institute for Supply Management’s PMI index for production declined 3.0 percent‐‐the third decline in a row. The Index for New Orders fell 0.2 percent the Backlog of Orders Index dropped for the third month in a row, down another 6.9 percent.

Freight Expenditures
Freight payments declined 0.4 percent in May, coming in at 10.1 percent below May 2015. This slow downward trend is completely opposite of the upward trend of previous years. The restrained growth in freight shipments—coupled with abundant available capacity—has pushed down rates. In addition, according to DAT Solutions, “total carrier revenue has been impacted by a 35 percent drop (10 cents per mile) in the fuel surcharge compared to last May.” The low demand is giving shippers more bargaining power to drive down rates. Many trucking companies, such as
Swift Trucking, are adjusting the size of their available fleet by parking trucks. In Swift’s case, 300 trucks were removed from its active fleet this Spring. Some analysts believe that rates are being driven so low that companies will not reinvest and that shippers should take advantage of this low point to lock in rates.

Overall Picture
Predicting the second half of 2016 and beyond gets more complicated with each economic report released. On the positive side, average annual wages are rising and with that increased consumer spending. On the negative side, the May jobs report showed only 38,000 jobs were created, and both March and April were revised downward. The number of people seeking jobs was relatively flat in recent months, which meant lower unemployment, but the number of disgruntled people leaving the job hunt grew, reducing the labor participation rate. Inventories are still too high, which is a continuing concern. Retail sales have grown steadily but slowly, but with more growth in online sales than from brick and mortar stores. Neither imports nor exports have increased substantially, nor are they expected to. We basically are at a standstill as we wait for the forecasted strengthening. AAR Chief Senior Vice President of Policy and Economics John T. Gray summed the situation up well: “Most economists think the economy has picked up in the second quarter from the dismal 0.8 percent growth in the first quarter, but so far railroads aren’t seeing much of it … Railroads are focusing on what they can control—providing safe, reliable service—while looking forward to the forces they can’t control turning their way.”