Not only have both the Shipments and Expenditures Indexes have now been positive for five months in a row, but they are showing accelerating strength. Throughout the U.S. economy, there is a growing number of data points suggesting that the economy continues to get slightly better. Some data points are simply less bad, but an increasing number of them are better, and even a few are becoming outright strong.

The 7.1% YoY increase in the May Cass Shipments Index is yet another data point which confirms that the first positive indication in October was a change in trend. In fact, it now looks as if the October Cass Shipments Index, which broke a string of 20 months in negative territory, was one of the first indications that a recovery in freight had begun. 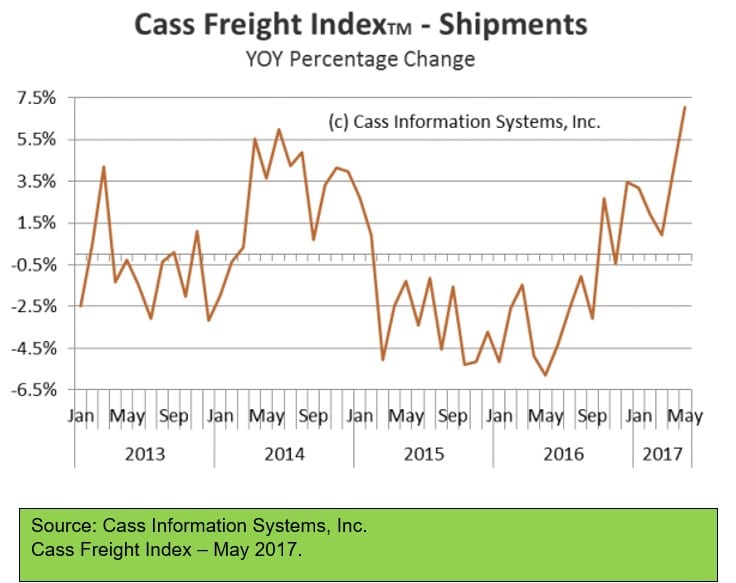 By itself the 7.1% May YoY change is very promising, and the nominal value of 1.168 is the highest level attained since August of 2014, which is even more promising.

Data is suggesting that the consumer is finally starting to spend a little, albeit not with brick and mortar retailers. It also suggests that, with the surge in the price of crude in October of last year, the industrial economy’s rate of deceleration first eased and then began a modest improvement led by the fracking of DUCs (drilled uncompleted wells), especially in the fields with a lower marginal production cost (i.e., Permian and Eagle Ford). We have been questioning, “How fast will the recovery from here be?” However, the overall freight recession, which began in March 2015, appears to be over and, more importantly, freight seems to be gaining momentum in most segments.

The May sequential pattern was also promising. Following a stronger April, May posted a healthy 4.3% sequential improvement. Viewing the shipments index on a nominal basis (in the chart below) highlights that the data in general is getting better.