The November Cass Freight Index showed a drop in total freight expenditures of 0.7 percent and a corresponding decline in shipment volumes of 0.2 percent. This was not unexpected given the fact that retailers stocked up early in anticipation of problems at the West Coast ports. While November is generally a slower month for freight movement, the last several years have shown dramatic drop-offs in November. So, in context, this slight downward shift is an encouraging improvement that is helping to cap off a good year for freight. 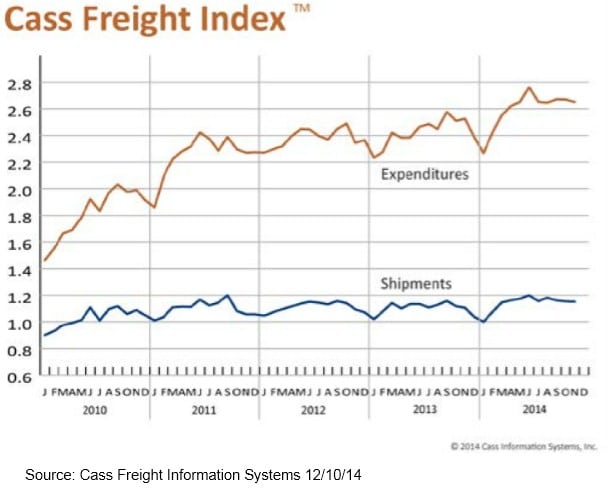 The number of freight shipments slid 0.2 percent from October to November. This is the third drop since August, but not cause for alarm. In fact, the November shipment level remained 4.2 percent higher than the same month a year ago and represents the highest point on our shipments index since the Great Recession. Inventories remain high, as many retailers placed orders early to avoid expected transportation problems with ports and truck capacity. Not all shippers were able to avoid deliveries to West Coast ports in November and they are experiencing three week – or longer – delays in receiving their goods. Labor issues, chassis shortages and inefficient chassis distribution, port throughput limitations due to heavily loaded, larger TEU ships, and rail capacity problems have combined to create costly freight bottlenecks at the ports of L.A., Long Beach and Oakland. In addition, early price discounting made a dent in traditional Black Friday sales figures and traffic. Early estimates show that store traffic was down 5.2 percent compared to last year’s Black Friday totals and sales are expected to be 11 percent lower than last year. Lower gas prices were expected to fuel more spending, but consumers are still behaving conservatively and holding out for even further discounting. Cyber Monday sales soared again this year, rising between 8.5 and 16 percent depending on the measure you follow, with the top 25 retailers experiencing bigger increases than their smaller competitors. The National Retail Federation still predicts overall holiday sales will rise 4.1 percent, and small package and parcel shippers, such as UPS and FedEx, have dramatically expanded their capacities to avoid the spate of late deliveries experienced last year.

The November freight payment index declined 0.7 percent, mirroring the drop in shipment volumes. Diesel fuel prices continue to impact rates, mitigating much of the increases announced recently. November 2014 payments are 5.0 percent higher than the corresponding month a year ago and remain close to the record high established in June of this year. Capacity was not as tight throughout much of  the supply chain, with the exception of port-related traffic, so spot prices were down.