After a promising Shipments Index in October broke the string of 20 months in negative territory, November fell back into negative territory, albeit slightly. We have seen a wide range of results in the different modes: from continued volume growth in parcel and airfreight driven by e-commerce, to a sequential improvement in truck tonnage, to less bad rail and barge volume overall. Although it is far too early to make a ‘change in trend’ call, data is beginning to suggest that the consumer is finally starting to spend a little, and that with the recent surge in the price of crude the industrial economy’s rate of deceleration has eased. If the winter of the current year-and-a-half freight recession in the U.S. is not over, it is certainly showing increasing signs of thawing. 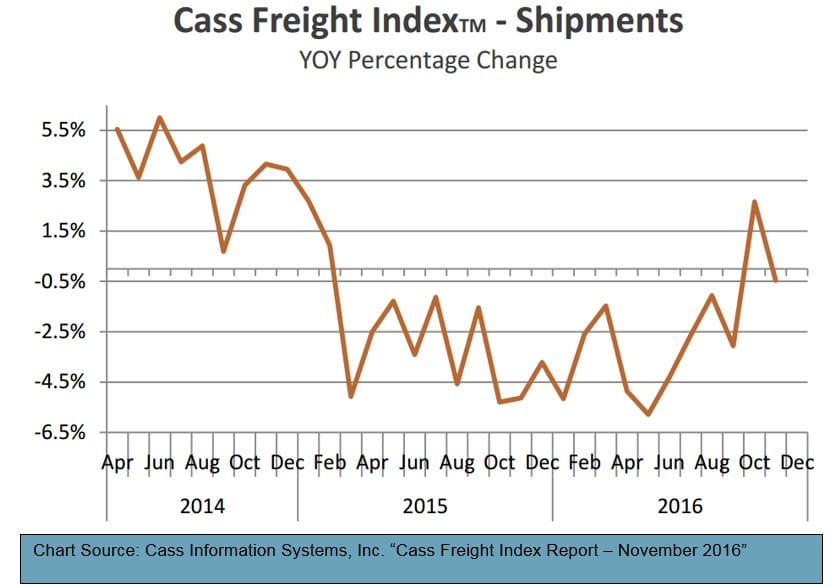 The sequential month pattern looked a bit more ominous, but doesn’t give us great cause for concern. There is some degree of normal seasonality at work, and we are currently getting daily reports of stronger shipment volume in almost all modes from both hard data sources and industry anecdotes.

Although still in negative territory, the Cass Freight Expenditures Index also gives us some hope. Expenditures were still down (-4.5% on a YoY (year-over-year) basis), but as was true in October, it was less than the rates of contraction in May, June, July and August; which were down 10.1%, 8.8%, 5.1%, and 6.3% respectively. We see this increase as a result of the steady increase in the price of fuel over the last six months (the recent rise in the price of crude should only add to this positive bias), but we are also seeing some improvements in pricing power of truckers and intermodal shippers. As an example, the proprietary Cass Truckload Linehaul Price Index (which does not include fuel) only fell 1.5% on a YoY basis in the month of November, which was far less than the 3.5% decline it posted in September. The proprietary Cass Intermodal Index (which does include fuel) faired even better, increasing 0.3% in November, which was also not only better than September’s 0.7% decline, but marked the second YoY increase after 21 consecutive months of decline.

We should also remind readers of a fundamental rule of marketplaces: volume leads growth. Repeatedly we have watched in a host of different markets, volume goes up before pricing starts to improve and volume goes down before pricing starts to weaken. Even in markets as basic as the weather, the number of hours of sunshine (start to
decline) falls long before the temperature starts to fall. As we approach the shortest day of the year in the northern hemisphere (December 21st), we know that the coldest temperatures are still coming in the months of January and February, weeks after the volume of sunshine will actually have started to improve.