Although the economy continued to be sluggish in November, our Freight Shipments Index was stronger than expected. Freight payments decreased, as capacity to carry was abundant. Black Friday sales—combined with Cyber Monday sales—were very strong this year as customers took advantage of reduced prices and discounts, placing orders before the cost of shipping goes up for the remainder of the holiday period. 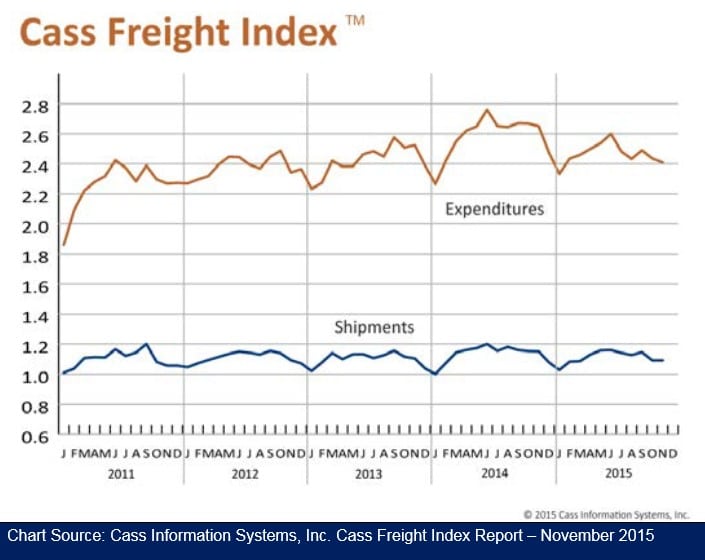 The number of freight shipments remained flat from October. This is the first time in five years that shipments did not drop off in November. That said, however, the Freight Shipments Index now sits at the lowest November level since October 2011. The Association of American Railroads reported a drop of 7.4 and 6.0 percent in carloads carried and intermodal, respectively. The drop in intermodal reflects the high inventory levels faced by retailers and wholesalers and is more reflective of the goods included in the Cass Freight Shipments Index. Much of the carload loss is due to drops in bulk commodities such as coal, petroleum products and metallic ores—products not as well represented in the Cass data. For November 2015, combined U.S. carload and intermodal originations were 2,065,767, down 6 percent year over year. The American Trucking Associations reported that October truck tonnage index rose 1.9 percent, a reflection of the movement of inventory from warehouses and distribution centers to sales outlets readying for November holiday sales. Imports have slowed down considerably as retailers and wholesalers have ample supply for the holiday season. The November Institute for Supply Management’s Purchasing Manager’s Index (PMI) declined almost 3 percent, while production was down 7 percent, new orders off 7.6 percent, and order backlog increasing 1.2 percent. For the first time since August 2012, the PMI Production Index has dropped to a level indicating that it is contracting. Most of the new orders placed were for consumer goods such as apparel, computer and electronic products, furniture and related products and leather and allied products.

FREIGHT EXPENDITURES
Freight spending fell again in November—the fourth drop in the last five months. Year-to-date average monthly freight payments are 4.7 percent lower than the average for 2014. Much of the difference can be explained by lower shipment volumes; however, these lower volumes eased up the tight capacity constraints we faced in 2014, keeping spot prices in check for much of the year (especially the second half). Contract rate increases have been extremely moderate.
OVERALL PICTURE
Some economic indicators favored by the Federal Reserve, such unemployment, household income, inflation and consumer spending, have stabilized in the last 18 months. The Federal Reserve has held back from raising interest rates, but is expected to announce higher rates in December. This will negatively affect those companies holding record high inventories, as carrying costs will begin to rise more rapidly. The inventory-to-sales ratio has risen dramatically in 2015, indicating that inventory turnover has slowed. Consumers are still the strongest force in the marketplace and are driving our continued recovery. Thanksgiving, Black Friday and Cyber Monday sales were strong compared to last year, with online sales in particular soaring. Expect freight to erode in December following established seasonal trends.