Following the trend observed in the last four years, both total spend and the number of shipments for North American freight declined in October. The indexes have been below 2013 levels for the last several months. The first reading on third quarter GDP was a disappointing 1.5 percent annual growth rate, compared to 3.9 percent in the second quarter. Consumer sector goods are, by far, the strongest in the market now. In many ways this is the silver lining in the storm clouds, because it means that consumers are still in the game. Consumer spending, which accounts for more than two‐thirds of U.S. economic activity, grew 3.2 percent in the third quarter after expanding at a 3.6 percent pace in the second quarter. 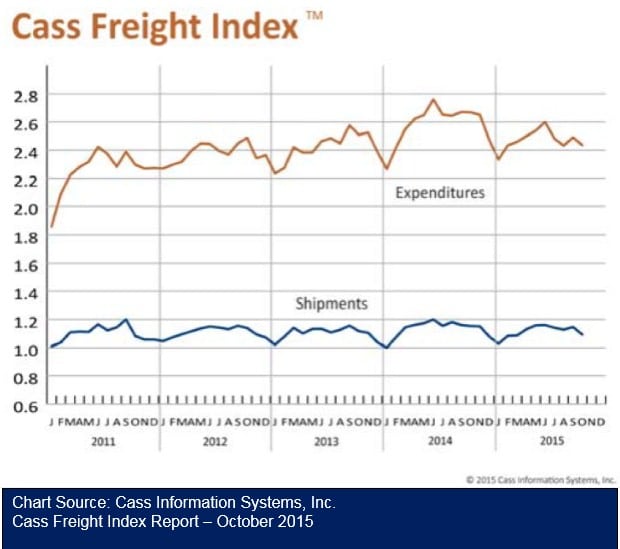 SHIPMENT VOLUMES
The number of freight shipments dropped 4.7 percent from September. The freight shipments index now sits at its lowest October level since 2011. This month’s decline was much sharper than in recent years and can be directly correlated to falling imports and exports as well as decreased domestic manufacturing levels. Burdened by bloated inventories, and under the shadow of a possible interest rate increase by the Federal Reserve, businesses cut back on new orders placed in the last three or four months. This is resulting in lower import volumes, less freight to move and faltering industrial production. With the dollar still strengthening, export growth decelerated in the third quarter. The Association of American Railroads reports that October traffic was down 4.3 percent from 2014 levels. More importantly, though, is that carloads dropped 20.7 percent and intermodal fell 20.3 percent from the previous month. Rail has been hit particularly hard by the rapid drop in industrial commodities caused by the steady decline in industrial production. Coal, petroleum and ores were down, while grain was up. The reductions in energy production are being felt throughout the freight community as shipments of not only petroleum, but also pipe, water, sand and other drilling materials, have dropped off significantly.

FREIGHT EXPENDITURES
Freight payments plummeted 8.7 percent in October—the third drop in the last four months (correlating with changes in shipment volumes). While some of this month’s decrease comes with the drop in shipments, spot rates have also impacted October’s results. At this point in time there is abundant capacity in the trucking sector, which has depressed spot rates. Trucking companies are reporting that new contracts are yielding only 2‐3 percent rate increases going into 2016. Dedicated carriage contracts are faring slightly better for the carriers, with an average of a 3‐4 percent rise in rates. Carriers are still reporting that they are unwilling to lose a good customer over a few percentage points.

OVERALL PICTURE
Third quarter GDP growth was indicative of the economic headwinds facing the economy caused by the strong U.S. dollar (making U.S. goods less competitive abroad) and the weakening world economy. However, the consumer sector is rising to the occasion and continues to improve, providing the missing element to a full recovery from the Great Recession. Consumer spending has been bolstered by low inflation, especially with fuel prices; improving jobs creation; and stronger household purchasing power. In October, the Labor Department reported that 271,000 jobs were added and the unemployment rate dipped to 5 percent. A report from the Labor Department showed new applications for unemployment benefits last week hovering near levels last seen
in late 1973. Growth in durable goods spending (for long‐lasting items such as washing machines and automobiles) continued strong, rising 6.7% in the third quarter. Inventory levels remain a looming problem as the Federal Reserve has been actively hinting that an interest rate hike is very possible in December. The combination of record inventory levels and an interest rate increase will cause a significant hike in inventory carrying costs. This will most likely drive a drawdown much like the one we saw in 2009 and 2010. Expect freight to continue to trail off through year’s end. Retailers and wholesalers have ample supply for the holiday season, so imports and freight shipments should not strengthen considerably.