As expected, freight shipments and payments rose in September following two months of decline. Looking back over the last several years, September is often the final growth spurt for the year. 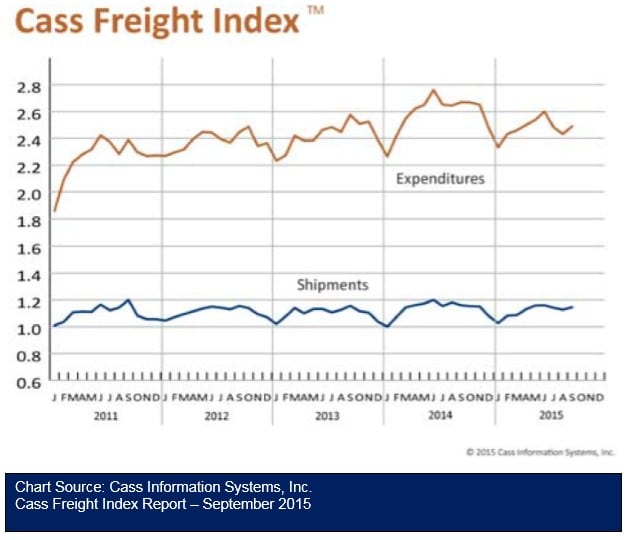 The number of freight shipments increased 1.7 percent in September, reversing a two month slide. This is a traditional month for a rise because shippers are receiving goods for the holiday season. The strong U.S. dollar and a sluggish global economy are continuing to make imports very attractive. Railroad cargo, both carload and intermodal, jumped up 22.6 percent over August levels,  which accounts for much of the increase in the freight sector. The Institute for Supply Management’s September PMI index fell for the third month in a row, while the Production sub‐index declined 12.1 percent after a strong gain in August. The PMI’s 6.2 percent drop was influenced by the steep decline in production and a 12 percent decline in new orders. There was a modest 1.4
percent rise in New Export Orders, supporting a 2.3 percent increase in order backlog. Consumer sentiment has been mostly strong, but less stable, in the last several periods.

Freight payments rose 2.4 percent, which coincides with an increase in shipments. Spot prices have been lower because of adequate capacity during the slowdown in August. Trucking companies are holding rate increases down, and offering capacity guarantees in exchange for higher rates. There has also been a steady growth in dedicated carriage agreements. We expect rate increases for the trucking sector to be modest through the end of the year. The exceptions are UPS and FedEx which have already announced a round of price increases that will go into effect in November, just as the holiday shipping season begins to heat up.

Many factors are affecting the current volume of freight, not the least of which is mounting inventory levels. All business inventories are continuing to grow, as are inventory‐to‐sales ratios, indicating that we are not at optimal levels given inventory turnover rates. In the first half of 2015, retail inventories rose 2.9 percent, compared to only 2.3 percent for all of 2014; manufacturing inventories increased 3.0 percent, compared to a decline of .25 percent in 2014. Wholesale inventories are up 2.3 percent in 2015, compared to 3.9 percent in all of 2014. Low interest rates, favorable import prices and moderate storage costs have encouraged the buildup, but even a one percent rise in interest rates could fuel a 2.3 percent rise in total logistics costs at current inventory levels. With the Federal Reserve choosing not to raise interest rates at its recent meeting, yet not ruling out an increase prior to year‐end, the potential for an uptick in consumer spending and a drawdown in inventory levels is uncertain.