After offering a glimmer of ‘less bad’ hope in August (only down 1.1% YoY and up 0.4% sequentially), the Cass Freight Index shipments data in September disappointed, providing hindsight that August only gave us ‘false hope.’ September data is once again signaling that overall shipment volumes (and pricing) continued to be weak in most modes, with increased levels of volatility as all levels of the supply chain (manufacturing, wholesale, retail) continue to try and work down inventory levels. That said, there have been a few areas of growth, mostly related to e-commerce, with lower levels of expansion being experienced in transit modes serving the auto and housing/construction industries. All of this added up to lower shipment volume in September on a YoY (Year-over-Year) basis, marking the nineteenth straight month of year-over-year decline. Bottom line, the Industrial Recession in the U.S. that began in March of 2015 continues to weigh on overall volumes. 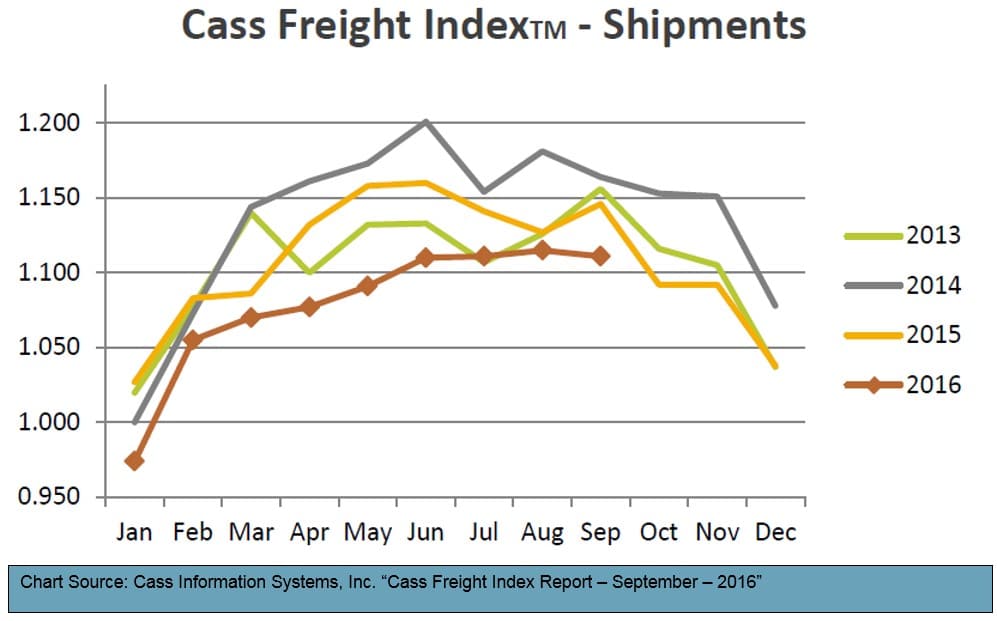 In a reversal of roles from last month, it was the Cass Freight Expenditures Index that gave us an initial glimmer of potential hope. Expenditures (or the total amount spent on freight) was up 5.2% sequentially, and the YoY rate of contraction appeared to be ‘less bad’ as it only contracted 3.8% (much less than the rates of contraction in May, June, July, and August; down 10.1%, 8.8%, 5.1%, and 6.3% respectively). We see this increase as a result of the steady increase in the price of fuel over the last six months and not the increase in pricing power of any single mode. As an example, the proprietary Cass Truckload Linehaul Pricing Index (which does not include fuel) fell 3.5% on a YoY basis in the month of September.

We continue to assert that the trucking industry provides one of the more reliable reads on the pulse of the domestic economy, as it gives us clues about the health of both the manufacturing and retail sectors. We should note that as the first industrial-led recovery (2009-2014) since 1961 came to an end, and the shift from ‘brick and mortar’ retailing to e-commerce/omni-channel continues, we are becoming more focused on the number of loads moved by truck and less focused on the number of tons moved by truck. Tonnage itself appears to be growing (three-month moving average +2.88 not seasonally adjusted). Counter to this, truck loads have now contracted on a YoY basis four out of the last six months in 2016. No matter how it is measured, the data coming out of the trucking industry has been both volatile and uninspiring.