“The freight logistics sector was relatively flat in September, with a drop in North American shipment volume and a slight increase in total freight expenditures, or payments. Other freight indicators have shown that shipment weights have been rising steadily, so a decrease in the actual number of shipments does not necessarily indicate a drop in freight activity. In a typical summer trend, the economy as a whole cooled in August and September.” 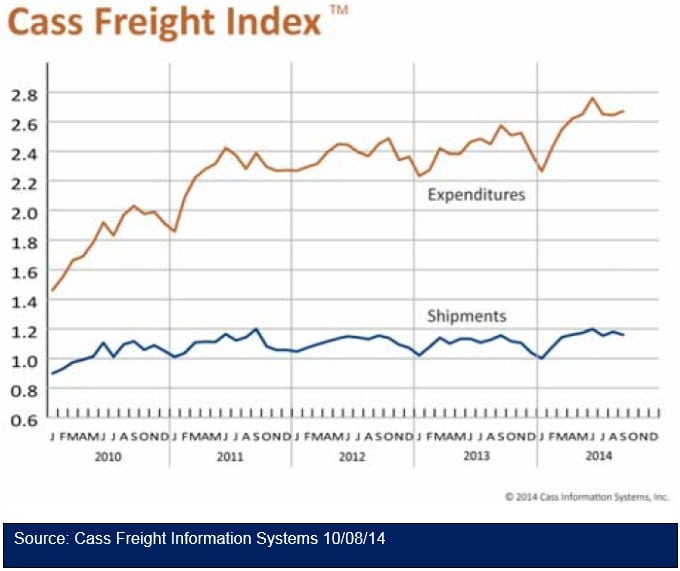 “The number of shipments fell 1.4 percent in September compared to August levels, but on a year ‐over‐year basis the number of shipments in September was only 0.7 percent higher than a year ago. Since the end of 2013 the number of freight waybills has increased 12.2 percent. Orders to U.S. factories fell by 10.1 percent in August, the largest amount on record according to the U.S. Department of Commerce. This decline, however, came on the heels of a record 10.5 percent increase in July. Almost all of these changes can be attributed to the commercial aircraft industry. The remaining sectors were largely unchanged in August, so the impact should be narrowly targeted on carriers moving aerospace materials.”

“The September freight expenditures index rose 0.8 percent, almost exclusively on increased tonnage. Diesel fuel prices have been falling since March, which reduced the fuel surcharges added to carriers’ linehaul rates and pushed down total expenditures for freight movement. September 2014 payments are 3.5 percent higher than the corresponding month a year ago and 11.7 percent higher than December 2013. It appears that for the last quarter we can expect a leveling off in freight shipment levels and more steady rates.”

“The freight industry continues to experience the strongest year since the recession ended, and while there are still headwinds, things should continue to improve for the industry. The rise in costs, especially related to labor, are pressing hard on rates and should break through in early 2015. The volume growth that has supported the strengthening in freight is still fragile and susceptible to outside forces. Consumers, the missing key for recovery, are getting back in to the game. Consumer confidence and, more importantly, consumer spending have been on the rise along with household income. A good holiday season would be a big boost for the end of the year.”