Imports at the nation’s congested container ports are expected to grow modestly during the first half of 2022, but continued high volumes will keep up pressure that built as the economy bounced back from the pandemic last year, according to the monthly Global Port Tracker report released today by the National Retail Federation and Hackett Associates. 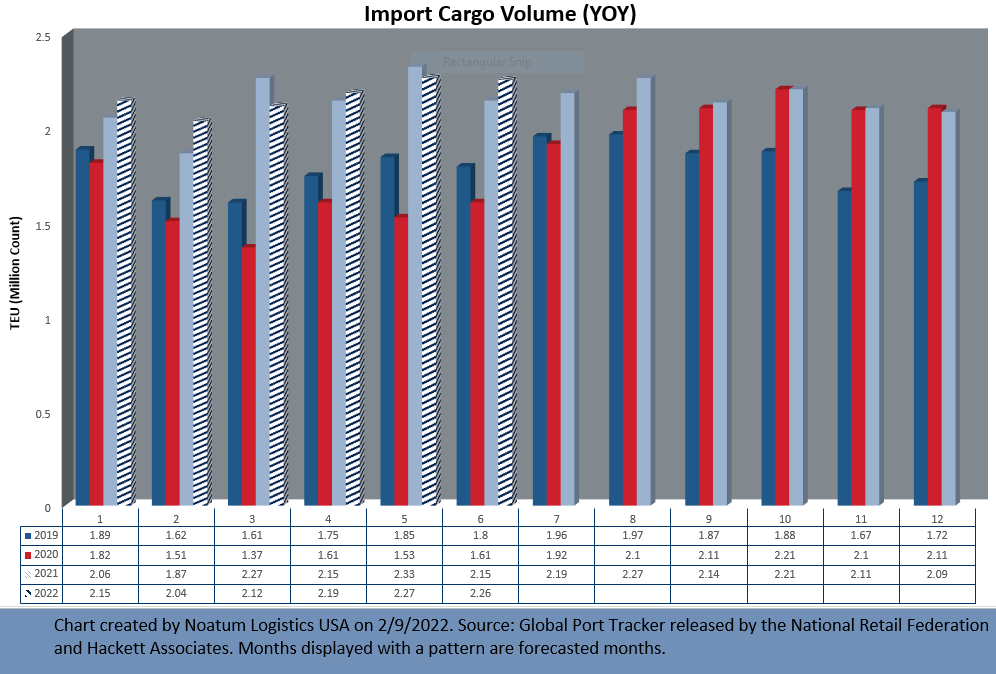 “We’re not going to see the dramatic growth in imports we saw this time last year, but the fact that volumes aren’t falling is a clear sign of continued consumer demand,” NRF Vice President for Supply Chain and Customs Policy Jonathan Gold said. “Last year set a new bar for imports, and the numbers remain high as consumers continue to spend despite COVID-19 and inflation. The slowdown in cargo growth will be welcome as the supply chain continues to try to adapt to these elevated volumes. Unfortunately, many experts expect ongoing disruptions throughout 2022 for a variety of reasons.”

Hackett Associates Founder Ben Hackett said congestion remains on both coasts and the Port of Los Angeles alone has around 40 ships waiting to dock. As more ships arrive each day and delays mean some cargo won’t get unloaded until the following month, shifts in import patterns could be difficult to follow for the next few months.

“With Lunar New Year factory closings in Asia this month and the consequent drop in export production, North American terminals will have an opportunity to reduce existing congestion,” Hackett said. “Nonetheless, backups cannot be erased quickly as long as terminals continue to face a lack of space brought on by the supply chain’s inability to efficiently transfer cargo out of the terminals to its end destinations. A shortage of equipment, worker availability and storage space at distribution centers and warehouses across the country remains problematic, as does the export of empty containers back to Asia.”

U.S. ports covered by Global Port Tracker are expected to handle 13 million Twenty-Foot Equivalent Units – one 20-foot container or its equivalent – during the first half of 2022, up 1.5 percent over the 12.8 million TEU handled during the same period in 2021. By contrast, the first half of 2021 saw a record 35.7 percent increase over the unusually slow first six months of 2020, when many Asian factories and U.S. stores were shut down because of the pandemic.

The ports handled 2.09 million TEU in December 2021, the latest month for which final numbers are available. That was down 1.2 percent from November and down 1 percent year-over-year. Imports for all of 2021 totaled 25.8 million TEU, a 17.4 percent increase over 2020’s record high of 22 million TEU that was set despite the pandemic.