Imports at the nation’s major retail container ports should see double-digit year-over-year increases for the next two months as a growing economy increases the demand for affordable merchandise, according to the monthly Global Port Tracker report released by the National Retail Federation and Hackett Associates. 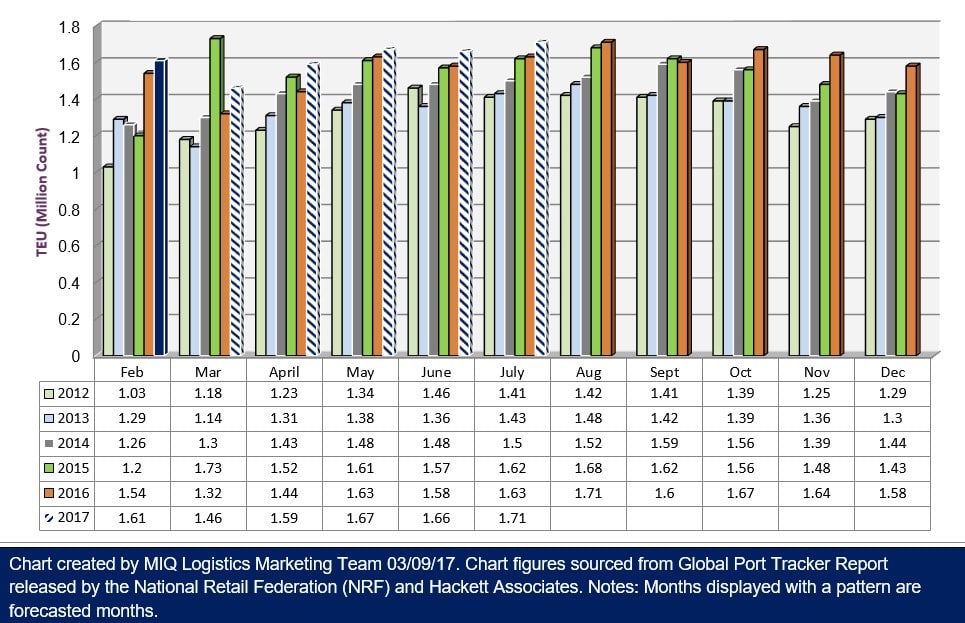 “Consumers are spending more freely and retailers are stocking up for the spring and summer seasons,” NRF Vice President for Supply Chain and Customs Policy Jonathan Gold said. “Merchants are making sure they are prepared to meet growing demand, and imports are essential to providing American families with the products they need at prices they can afford.”

“The threat of a ‘border adjustment’ tax, withdrawal from the Trans-Pacific Partnership and a possible rewrite of the North American Free Trade Agreement might eventually dampen the trading spirit and discourage international trade,” Hackett Associates Founder Ben Hackett said. “In the meantime, the opposite is happening – trade is continuing to grow despite these developments in Washington.”

Ports covered by Global Port Tracker handled an unusually high 1.67 million Twenty-Foot Equivalent Units in January, the latest month for which after-the-fact numbers are available. The large volume came as factories in Asia shipped a surge of products ahead of Lunar New Year shutdowns and was up 6.5 percent from December and 12.5 percent year-over-year. One TEU is one 20-foot-long cargo container or its equivalent.