With coronavirus causing longer Lunar New Year shutdowns of factories in China, imports at major U.S. retail container ports are expected to see a sharper-than-usual drop this month, according to the Global Port Tracker report released today by the National Retail Federation and Hackett Associates. 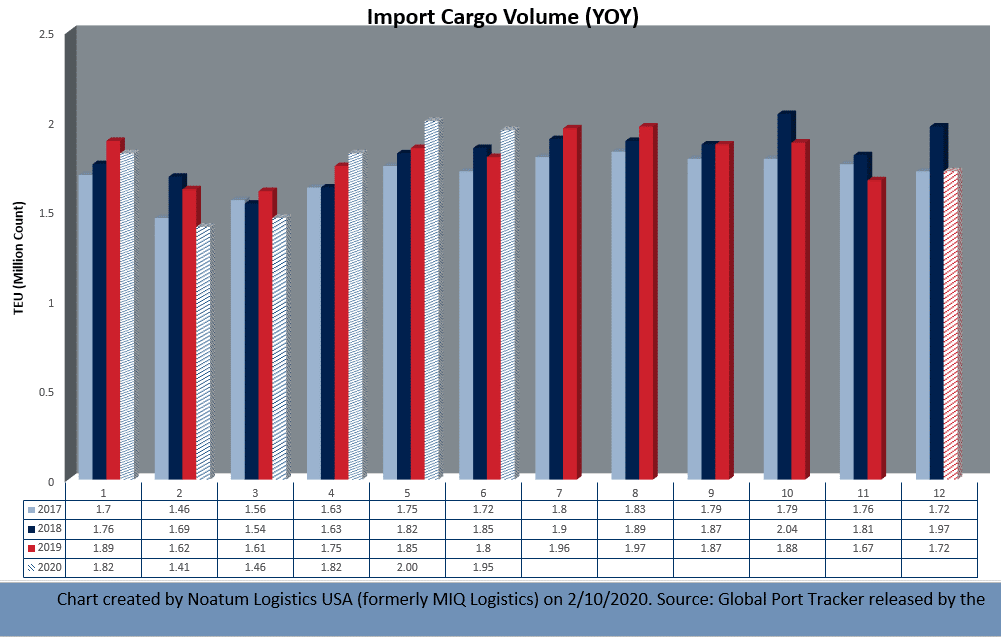 “February is historically a slow month for imports because of Lunar New Year and the lull between retailers’ holiday season and summer, but this is an unusual situation,” NRF Vice President for Supply Chain and Customs Policy Jonathan Gold said. “Many Chinese factories have already stayed closed longer than usual, and we don’t know how soon they will reopen. U.S. retailers were already beginning to shift some sourcing to other countries because of the trade war, but if shutdowns continue, we could see an impact on supply chains.”

“Projecting container volume for the next year has become even more challenging with the outbreak of the coronavirus in China and its spread,” Hackett Associates Founder Ben Hackett said. “It’s questionable how soon manufacturing will return to normal, and following the extension of the Lunar New Year break all eyes are on what further decisions China will make to control the outbreak.”

U.S. ports covered by Global Port Tracker handled 1.72 million Twenty-Foot Equivalent Units in December, the latest month for which after-the-fact numbers are available. That was up 1.8 percent from November but down 12.4 percent from unusually high numbers at the end of 2018 ahead of a scheduled tariff increase that was ultimately postponed. A TEU is one 20-foot-long cargo container or its equivalent.

December’s numbers brought 2019 to a total of 21.6 million TEU, a 0.8 percent decrease from 2018 amid the ongoing trade war but still the second-highest year on record. Imports during 2018 hit a record of 21.8 million TEU, partly due to frontloading ahead of anticipated 2019 tariffs.