The Freight Transportation Services Index (TSI), which is based on the amount of freight carried by the for-hire transportation industry, rose 0.3 percent in October from September, rising for the fourth consecutive month, according to the U.S. Department of Transportation’s Bureau of Transportation Statistics’ (BTS). The October 2014 index level (121.8) was 28.8 percent above the April 2009 low during the most recent recession. 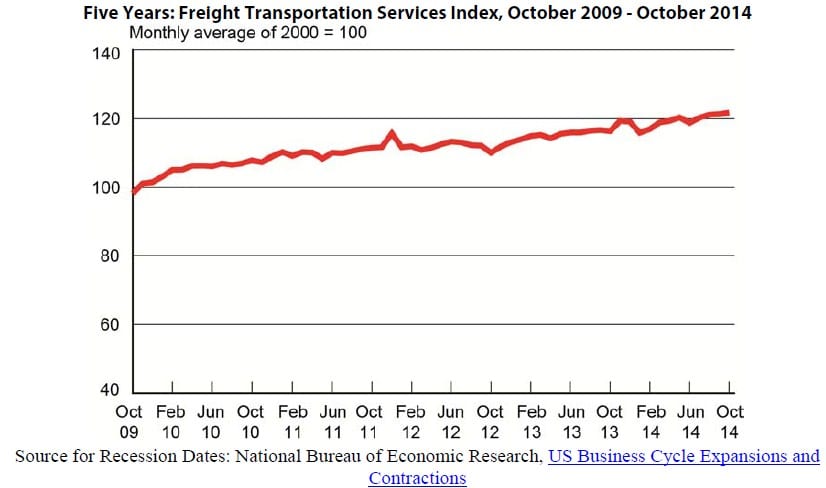 The level of freight shipments in October measured by the Freight TSI (121.8) reached its all-time high. BTS’ TSI records begin in 2000.

Analysis: The growth in October was led by trucking, rail and waterborne. During the month, several other indicators of related parts of the economy that often impact transportation increased. Employment and retail sales both increased, as did manufacturing output, though total industrial production declined slightly. Inventories increased to reach an historic high.

Trend: The Freight TSI increased for the fourth month in a row in October, reaching an all-time high. The increase was a return to growth after a decline in June. This October rise was the eighth monthly increase in 2014. However, due to the decline in June and the more substantial decline in January, the total 2014 increase has been only 2.2 percent, less than the 2.8 percent increase during same period in 2013. After dipping to 94.6 in April 2009, the index rose 28.8 percent in the succeeding 66 months.

>> Click here to read the entire press release from the U.S. Department of Transportation.