With the last of holiday season merchandise making its way to retailers, United States-bound imports are expected to see a bump in December, according to the most recent edition of the Port Tracker report issued today by the National Retail Federation (NRF) and maritime consultancy Hackett Associates. 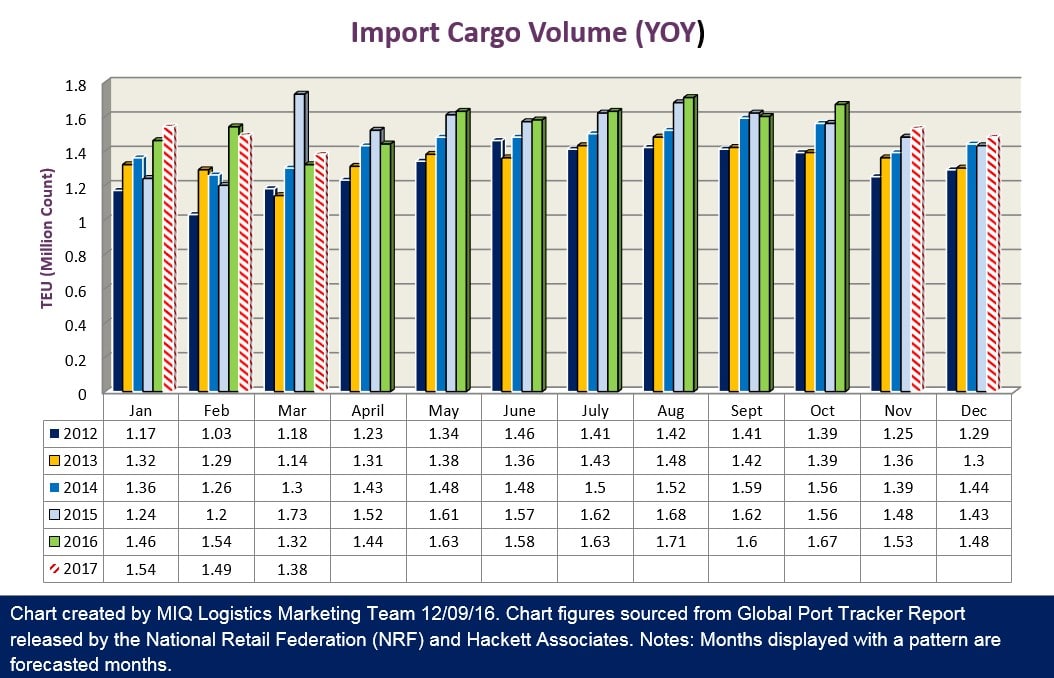 “There’s still shopping to be done, and retailers are making sure the gifts that need to be under a tree are waiting on the shelves,” NRF Vice President for Supply Chain and Customs Policy Jonathan Gold said. “Imports are up a healthy amount over this time last year, and that’s a good sign for holiday sales and the economy.”

For October, the most recent month for which data is available, total volume came in at 1.67 million Twenty-Foot Equivalent Units (TEU) for a 4.6 percent increase compared to September and a 7.4 percent annual gain.

As defined by the NRF, the holiday sales season is comprised of the months of November and December. And the report’s expectations for November and December are in line with the NRF’s recent forecast for holiday sales to be up 3.6 percent at $655.8 billion. The report noted that cargo volume does not correlate directly to sales, because only the number of containers is counted and not solely the value of cargo inside the container, while it still serves as a barometer of retailers’ expectations.

Hackett Associates Founder Ben Hackett wrote in the report that the expected 1.6 percent volume gain (this number includes certain Canadian ports) is below GDP growth, which suggests a disconnect between consumption making up 70 percent of GDP and the actual import figures.

“What we are experiencing is an environment where trade growth is weaker than GDP,” he wrote. “This is a new phenomenon. It was not long ago when industry leaders were doing their forecasts based on trade growth outpacing GDP by a ratio of more than 2-to-1. Those days are gone, and trade economists are suggesting that we might not see parity again in the coming three to five years.”

Hackett also cited what could be viewed as mixed messages in terms of what the economic impact of President-elect Donald Trump could be for GDP and volumes. He explained that Trump’s proposed infrastructure spending could create a surge in trade as s huge economic stimulus impacts the market, but he also noted that Trump has called for tariffs on goods from China and Mexico that would discourage trade.