Imports at the nation’s major retail container ports are expected to increase 1.5 percent this month over the same time last year, according to the monthly Global Port Tracker report released today by the National Retail Federation and Hackett Associates. The year, which included five of the seven busiest months for imports on record, should end with a healthy 6.4 percent increase over 2016. 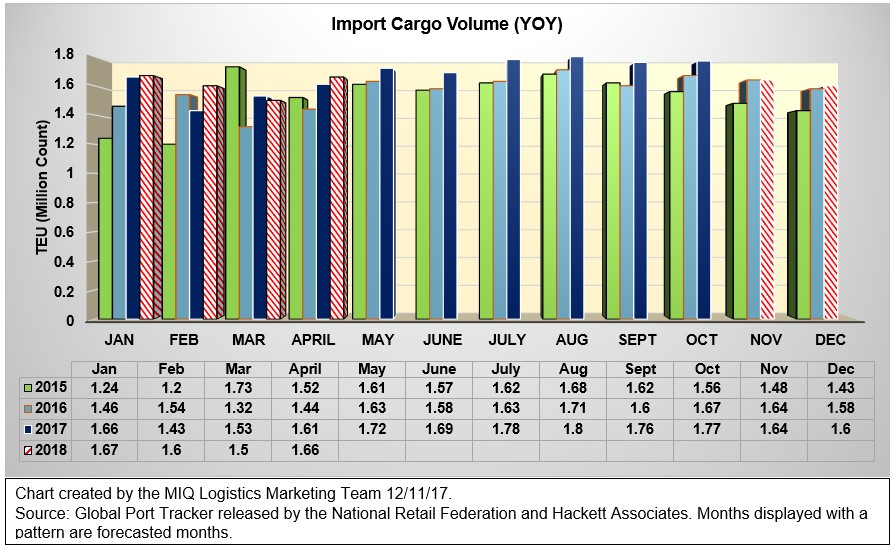 “Retailers are doing last-minute restocking as consumers head toward the finish line of the shopping season, but the majority of holiday merchandise is already in the country and ports are beginning to quiet down,” NRF Vice President for Supply Chain and Customs Policy Jonathan Gold said. “With tax cuts that will leave more money in shoppers’ pockets in the headlines and consumer confidence high, all signs are that this has been a strong holiday season.”

Gold added, however, that retailers’ ability to provide consumers with quality products at affordable prices could be threatened if the United States pulls out of the North American Free Trade Agreement or engages in other anti-trade policy that fails to recognize the increased employment and other contributions imports make to the nation’s economy.

“Despite constant threats from the administration regarding trade, especially free trade agreements, imports have been riding high,” Gold said. “Concerns continue about what will happen in 2018 and beyond.”

Ports covered by Global Port Tracker handled 1.77 million Twenty-Foot Equivalent Units in October, the latest month for which after-the-fact numbers are available. That was up 0.3 percent from September and up 5.9 percent year-over-year. A TEU is one 20-foot-long cargo container or its equivalent.

November was estimated at 1.64 million TEU, down 0.3 percent from last year, and December is forecast at 1.6 million TEU, up 1.5 percent.

The year set an all-time monthly record of 1.8 million TEU in August, and included five of only seven months when imports have hit 1.7 million TEU or higher.

The import numbers come as NRF is forecasting that 2017 retail sales will grow between 3.2 and 3.8 percent over 2016 and that this year’s holiday sales will grow between 3.6 and 4 percent. Cargo volume does not correlate directly with sales because only the number of containers is counted, not the value of the cargo inside, but nonetheless provides a barometer of retailers’ expectations.