WASHINGTON, September 7, 2022 – With inflation continuing and the Federal Reserve hoping to cool demand through higher interest rates, imports at the nation’s major container ports are expected to fall below last year’s levels for the remainder of 2022, according to the monthly Global Port Tracker report released today by the National Retail Federation and Hackett Associates. 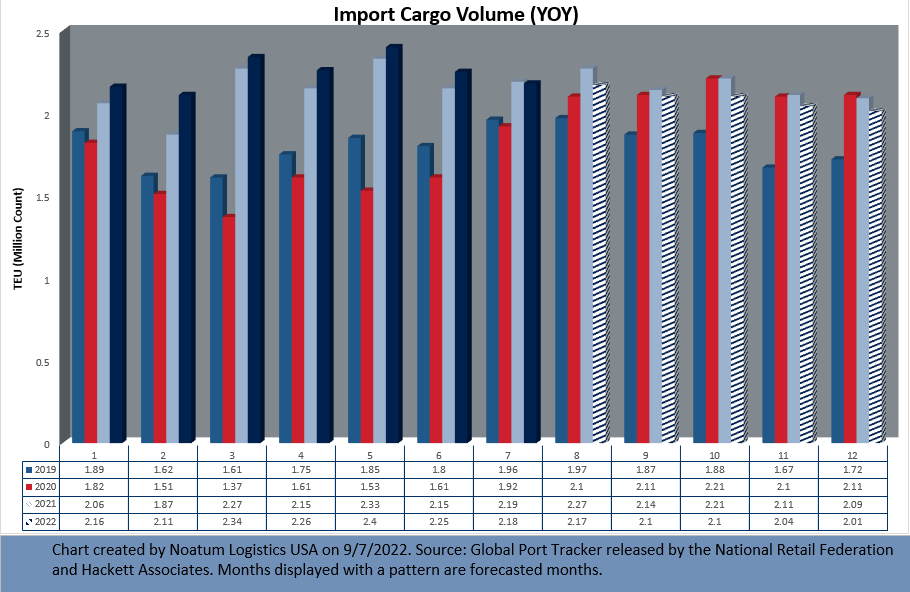 “Consumers are still buying, but the cargo surge we saw during the past two years appears to be slowing down,” NRF Vice President for Supply Chain and Customs Policy Jonathan Gold said. “Cargo volumes are solidly above pre-pandemic levels, but the rate of growth has slowed and even slid into negative numbers compared with unusually high volumes last year. The key now is dealing with ongoing supply chain issues around the globe and with labor negotiations at West Coast ports and freight railroads. Smooth operations at the ports and on the rails is crucial as we enter the busy holiday season.”

Talks continue between the International Longshore and Warehouse Union and the Pacific Maritime Association, whose contract expired July 1. Meanwhile, the freight railroads and their union have continued to negotiate after recommendations from the Presidential Emergency Board appointed this summer were released. Both dockworkers and railroad workers remain on the job, but there are concerns about potential disruptions.

“The number of vessels waiting to dock on the West Coast has been reduced to near-normal,” Hackett Associates Founder Ben Hackett said. “But with the switch of some cargo to the East Coast, congestion and pressure on the ports has shifted to the East Coast. The inland supply chain, particularly rail, continues to face difficulties that have resulted in the delay of containers leaving ports, causing terminal congestion that impacts the ability of carriers to discharge their cargo.”

U.S. ports covered by Global Port Tracker handled 2.18 million Twenty-Foot Equivalent Units – one 20-foot container or its equivalent – in July, the latest month for which final numbers are available. That was down 3.1 percent from June and down 0.4 percent from July 2021 – only the third year-over-year decline in two years and the first since December 2021.

The current decline is expected to continue in January 2023, which is forecast at 2.11 million TEU, down 2.6 percent from January 2022.

The cargo data comes as NRF continues to forecast that 2022 retail sales will grow between 6 percent and 8 percent over 2021. Sales were up 6 percent during the first seven months of the year.