Year-over-year import cargo volume at the nation’s major retail container ports is expected to continue to rise during most of the first half of 2015 despite significant congestion still impacting West Coast ports, according to the monthly Global Port Tracker report released today by the National Retail Federation and Hackett Associates. 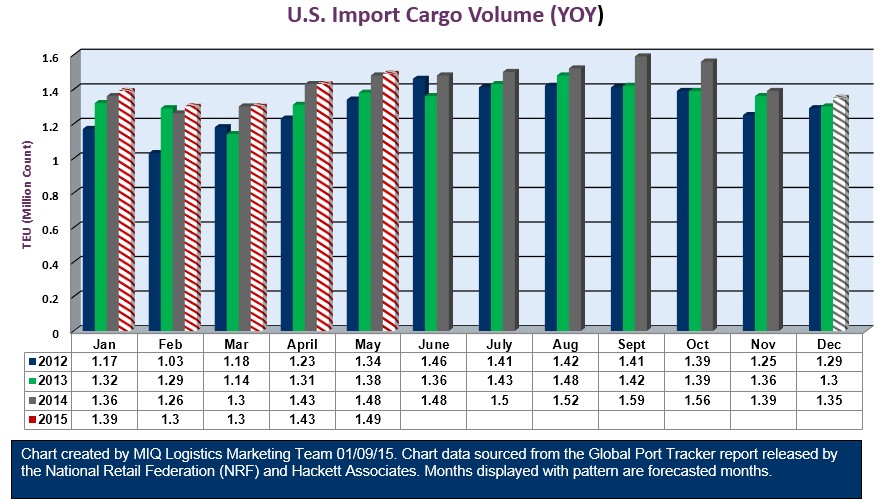 “Now that a federal mediator is on the scene, we hope the mediator will be able to help the parties quickly reach a new contract so we can begin to work on solutions to the ongoing congestion issues,” NRF Vice President for Supply Chain and Customs Policy Jonathan Gold said. “The urgent need to end the uncertainty we’ve seen for half a year now isn’t over just because the holiday season has ended. Retailers are already starting to bring in products for the spring season, and want both labor and management to work together to bring these issues to an end.”

The contract between the Pacific Maritime Association and the International Longshore and Warehouse Union expired on July 1. The lack of a contract and other operational issues led to crisis-level congestion at the ports, and NRF asked President Obama to engage with the parties and encourage the use of a federal mediator. A mediator arrived in San Francisco on Tuesday and is currently working with labor and management on the contract negotiations.

Ports covered by Global Port Tracker handled 1.39 million Twenty-Foot Equivalent Units in November, the latest month for which after-the-fact numbers are available. That was down 10.7 percent from October as holiday merchandise wound down but up 3.5 percent from November 2013. December was estimated at 1.35 million TEU, up 2.7 percent from the year before. One TEU is one 20-foot cargo container or its equivalent.

“2014 started out with a whimper as winter weather hammered the country but it appears to have ended with a bang,” Hackett Associates Founder Ben Hackett said. “Import volumes on the West Coast, despite all the problems there, were the highest since 2009. A similar picture exists on the East Coast, which had even healthier results.”