After months of record-setting volume as retailers stocked up for a busy holiday season, imports at the nation’s major container ports should be essentially flat this month compared with the same time last year, according to the monthly Global Port Tracker report released today by the National Retail Federation and Hackett Associates. 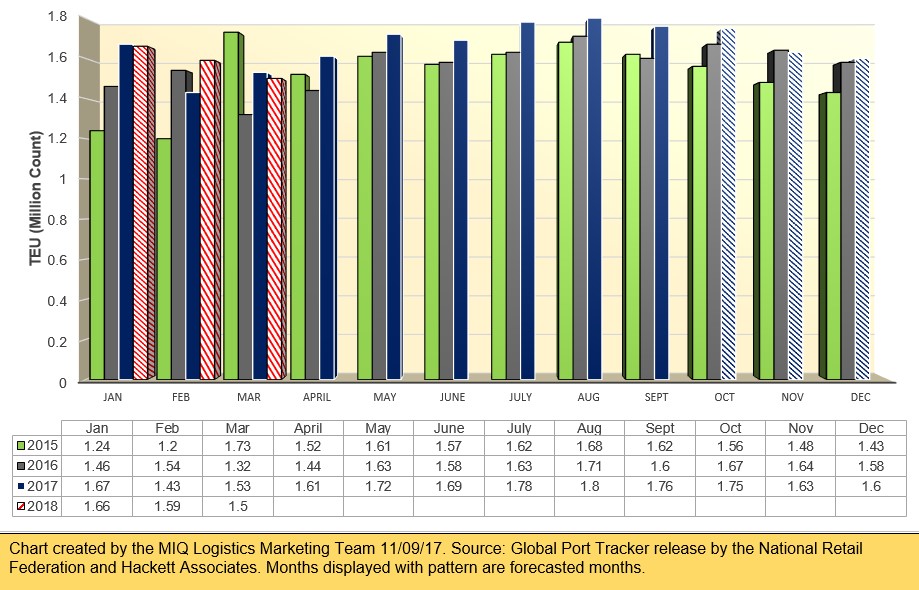 “The stores and warehouses are full, and it’s time for the shopping to begin,” NRF Vice President for Supply Chain and Customs Policy Jonathan Gold said. “Retailers have been bringing in merchandise since late summer, and supply is ready to meet the increased demand that has been building throughout the year.”

“At this time of year, it’s important to remember the role imports play in making the holidays affordable for American families and the millions of U.S. jobs behind every product on the shelf regardless of where it is made,” Gold said. “Our nation needs to avoid trade wars and other misguided trade policy that would drive up consumer prices or cost American workers their jobs.”

Ports covered by Global Port Tracker handled 1.76 million Twenty-Foot Equivalent Units in September, the latest month for which after-the-fact numbers are available. That was a 2.3 percent decrease from the record-setting 1.8 million TEU recorded in August, but still a 10.5 percent increase year-over-year. A TEU is one 20-foot-long cargo container or its equivalent.

October was estimated at 1.75 million TEU, up 4.9 percent from last year. While not records, the September and October numbers were among only six times that monthly volume has hit 1.7 million TEU or higher since NRF began tracking imports in 2000.

“This has turned out to be a boom year for growth in import cargo volume,” Hackett Associates Founder Ben Hackett said. “It reflects strong growth in spending by U.S. consumers.”

After a record-setting year, however, the rate of import growth is expected to slow in 2018. “We see no decline in volume and no recession – just time out for a breather,” Hackett said.