Import cargo volume at the nation’s major retail container ports is expected to rise 8 percent this month over the same time last year as West Coast ports continue to recover from a backlog of cargo that built up before a tentative new labor agreement was signed, according to the monthly Global Port Tracker report released today by the National Retail Federation and Hackett Associates. 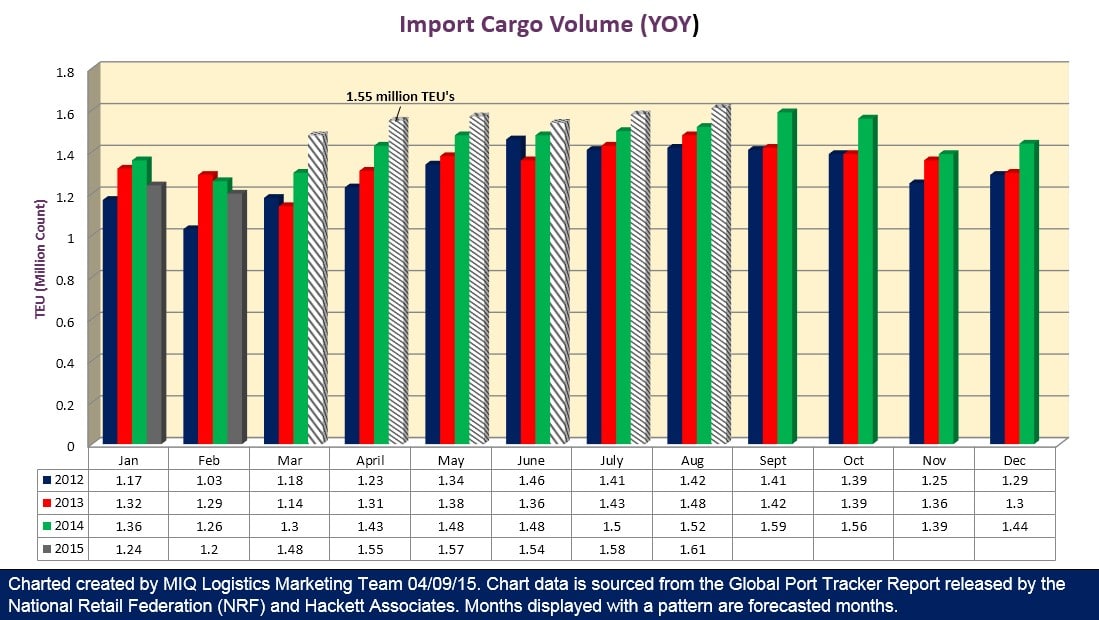 “Progress is being made but there’s still a lot of cargo waiting to be loaded onto trucks and trains and moved across the country even after it’s unloaded from the ships,” NRF Vice President for Supply Chain and Customs Policy Jonathan Gold said. “The situation is getting better but we’re still far from normal.”

The Pacific Maritime Association and the International Longshore and Warehouse Union tentatively agreed on a five-year contract in February. While ILWU leadership has recommended that members vote for ratification, votes won’t be counted until May 22. The lack of a contract and operational issues led to crisis-level congestion at the ports after the previous agreement expired last July, and issues were not resolved until a federal mediator and Labor Secretary Tom Perez joined the talks.

Ports covered by Global Port Tracker handled 1.2 million Twenty-Foot Equivalent Units in February, the latest month for which after-the-fact numbers are available and historically the slowest month of the year. That was down 10.3 percent from January and down 3.6 percent from February 2014. One TEU is one 20-foot-long cargo container or its equivalent.

The first half of 2015 is forecast at 8.6 million TEU, an increase of 3 percent over the same period last year.

“The disruption on the West Coast appears to be over and great measures are being taken to clear the backlog of ships sitting offshore,” Hackett Associates Founder Ben Hackett said. “Of course, all those ships being discharged are causing landside issues as workers try to get containers out of the terminal gates and onto trucks and rail.”