Import cargo volume at the nation’s major retail container ports is expected to rise 10.1 percent this month over the same time last year even as West Coast ports come closer to a possible shutdown due to the lack of a contract with dockworkers, according to the monthly Global Port Tracker report released today by the National Retail Federation and Hackett Associates. 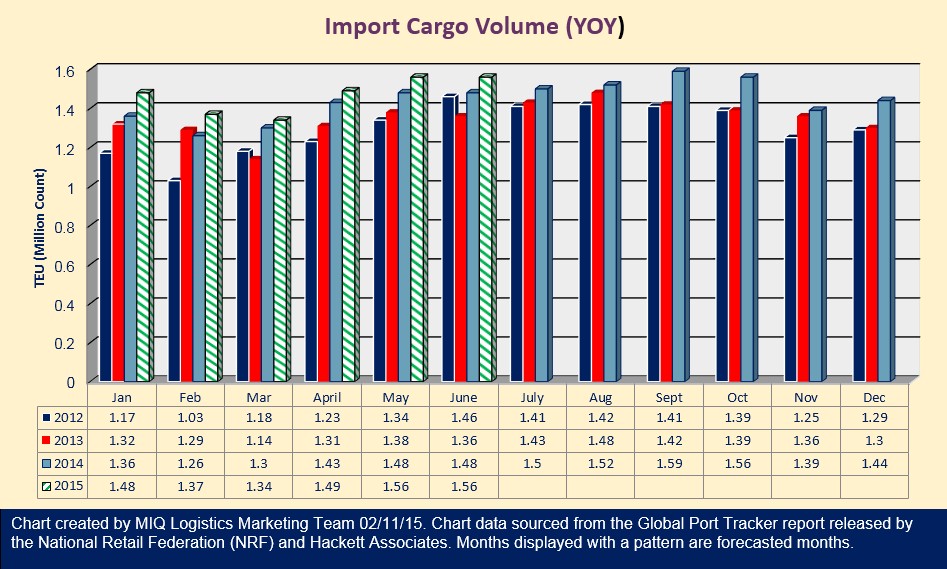 “With cargo volume growing as the economy continues to recover, the last thing we need is a port shutdown that would bring billions of dollars of economic activity to a halt,” NRF Vice President for Supply Chain and Customs Policy Jonathan Gold said. “Whether it’s in retail, manufacturing, agriculture or other industries, there are too many jobs that rely on the ports to let that happen. Labor and management need to do whatever it takes to reach an agreement and do it today.”

Following negotiations that began last spring, the contract between the Pacific Maritime Association and the International Longshore and Warehouse Union expired on July 1. Despite nine months of ongoing talks, the lack of a contract and other operational issues has led to crisis-level congestion at the ports, and retailers and other businesses asked President Obama in late December to engage with both parties and encourage the use of a federal mediator. A mediator arrived in San Francisco on January 6 and talks have continued but an agreement has yet to be reached.

Ports covered by Global Port Tracker handled 1.44 million Twenty-Foot Equivalent Units in December, the latest month for which after-the-fact numbers are available. That was up 3.2 percent from November and 9.3 percent from December 2013. That brought 2014 to a total of 17.3 million TEU, an increase of 6.6 percent over 2013’s 16.2 million. One TEU is one 20-foot-long cargo container or its equivalent.

“East Coast ports have been the beneficiaries of the labor disputes on the West Coast,” Hackett Associates Founder Ben Hackett said, referring to the shift of market share that has occurred as cargo has been diverted in recent months because of West Coast congestion. “We have to admit that we underestimated the level of the switch.”