Imports likely saw their busiest “peak season” on record this summer and fall as retailers replenished inventories and stocked up for the holiday season, according to the monthly Global Port Tracker report released today by the National Retail Federation and Hackett Associates. 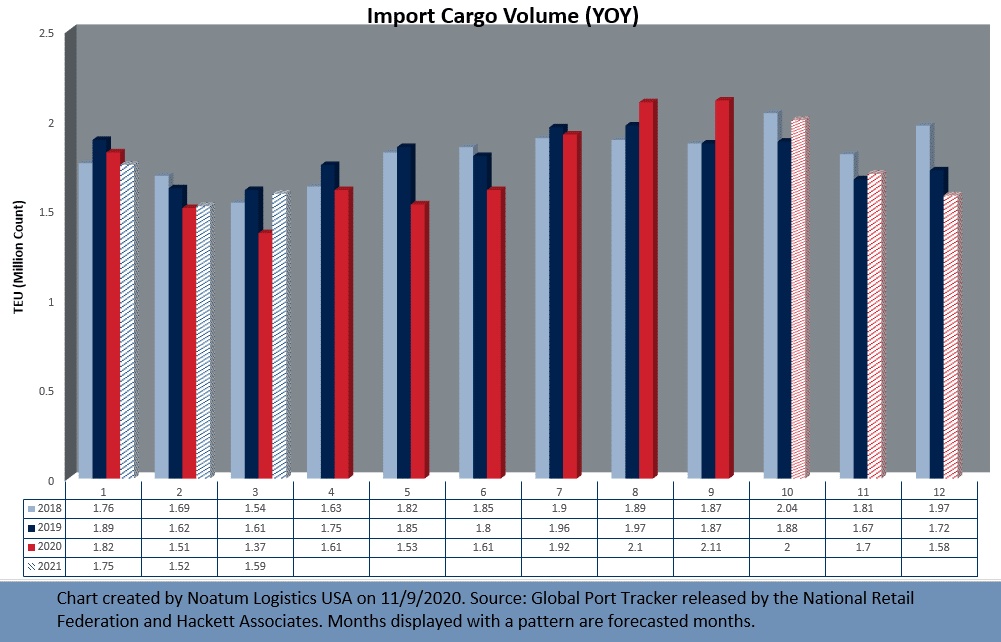 “Peak season is the Superbowl of the supply chain world each year as retailers make sure they have enough merchandise on hand to satisfy demand during the holidays, and this is the busiest we’ve ever seen,” NRF Vice President for Supply Chain and Customs Policy Jonathan Gold said. “Part of this surge was fueled by restocking after retail sales rebounded this summer and part could be making sure there aren’t shortages if we see panic buying again. The economic challenges of the pandemic aren’t over yet, but this clearly shows how an industry that has been under stress is fighting back in a positive way. Retailers don’t import merchandise they don’t think they can sell, so this is a good sign for the holiday season.”

“As we near the end of a difficult year in terms of health, trade and politics, we have witnessed record-breaking statistics that have been virtually unpredictable,” Hackett Associates Founder Ben Hackett said. “Imports hit all-time highs this summer and online shopping did the same. Whether similar patterns will continue in the coming months will be influenced to a large extent by the coronavirus pandemic and whether it will be brought under control by the arrival of expected vaccines next year.”

U.S. ports covered by Global Port Tracker handled an estimated 8.1 million Twenty-Foot Equivalent Units from July through October, the peak shipping season when retailers rush to bring in merchandise for the winter holidays each year. While subject to revision once October numbers become final, that would be an increase of 6.1 percent over last year and would beat the previous record of 7.7 million TEU set in 2018.

The peak season record includes a record 2.11 million TEU imported in September, the latest month for which after-the-fact numbers are available. That was a 12.5 per year-over-year increase and 0.1 percent higher than August’s previous record of 2.1 million TEU for the largest number of containers imported in a single month since NRF began tracking imports in 2002.

NRF is awaiting additional economic data before releasing its annual holiday spending forecast. But consumers surveyed for NRF by Prosper Insights & Analytics plan to spend an average $997.79, down $50 from 2019 as they focus on gifts rather than purchases for themselves. NRF is urging consumers to shop safe and shop early to avoid overcrowding stores and to take advantage of early holiday discounts.