Imports reached an all-time high this summer as retail sales bounced back from the pandemic and merchants replenished inventories and stocked up early for the holiday season, according to the monthly Global Port Tracker report released today by the National Retail Federation and Hackett Associates. 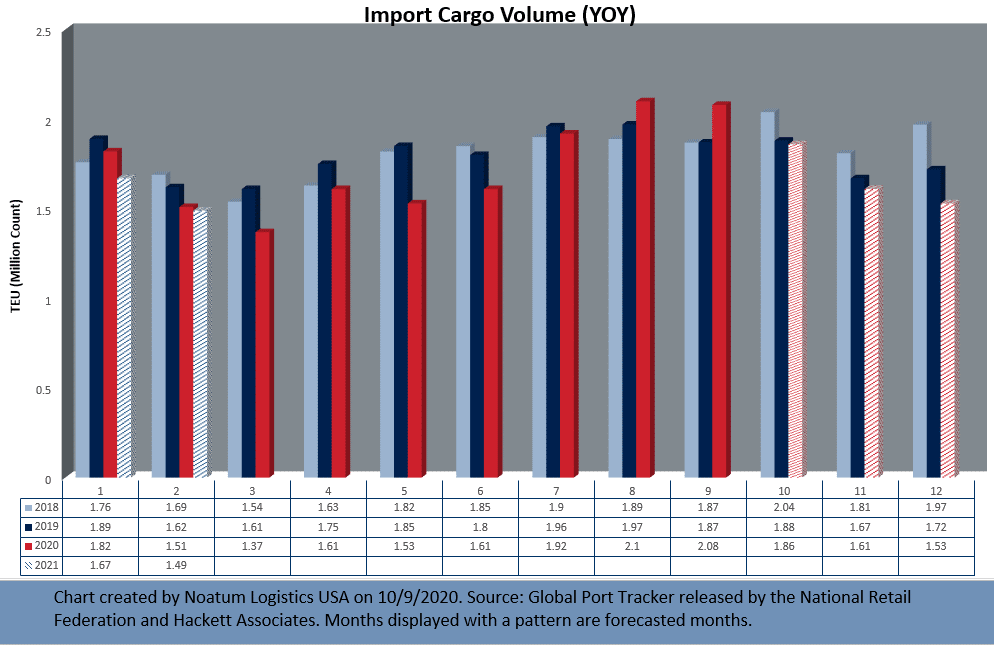 “After staying at home this spring, consumers are buying again and retail supply chains are working overtime to keep up with demand,” NRF Vice President for Supply Chain and Customs Policy Jonathan Gold said. “Nothing about this year is predictable, but retailers are making sure their shelves and warehouses are well-stocked for the holidays. They are also stocking up earlier than usual because they know many consumers will be shopping early this year to avoid crowds and shipping delays. Some holiday merchandise that normally wouldn’t arrive until Halloween is already here.”

U.S. ports covered by Global Port Tracker handled 2.1 million Twenty-Foot Equivalent Units in August, the latest month for which after-the-fact numbers are available. That was up 9.7 percent from July and up 8 percent year-over-year. It was the highest number of containers imported in a single month since NRF began tracking imports in 2002, beating 2.04 million TEU seen in October 2018 ahead of a scheduled tariff increase. A TEU is one 20-foot-long cargo container or its equivalent.

September was estimated at 2.08 million TEU, a 10.9 percent year-over-year increase. September’s actual total won’t be known until next month but could become the second-highest month on record. October is forecast at 1.86 million TEU, down 1.1 percent year over year.

Those numbers would amount to a record 7.96 million TEU during the July-October “peak season” when retailers rush to bring in merchandise for the winter holidays, topping 7.7 million TEU in 2018. Three-quarters of peak season imports – an estimated 6.1 million TEU – have already arrived, preparing retailers for the early shopping NRF expects this year.