Imports Settling Down After Surge to Clear Backlog

Import cargo volume at the nation’s major retail container ports is returning to normal levels as officials prepare to count votes on ratification of a new West Coast labor agreement that ended months of uncertainty, according to the monthly Global Port Tracker report released today by the National Retail Federation and Hackett Associates. 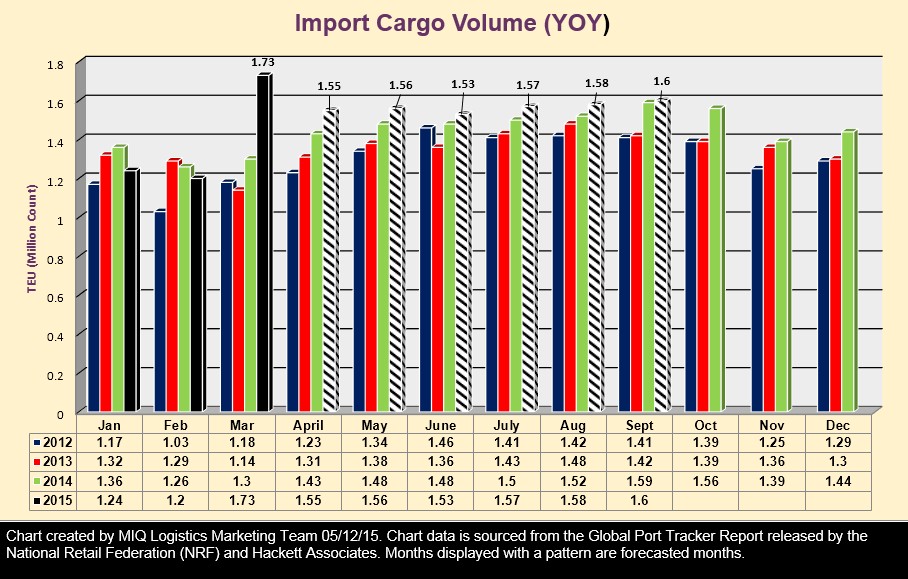 “Dockworkers and management made a massive push to clear the backlog of cargo over the past several weeks and West Coast ports are getting back to normal despite concerns such as the Teamster picketing seen in Los Angeles and Long Beach earlier this month,” NRF Vice President for Supply Chain and Customs Policy Jonathan Gold said. “We hope to see this month’s ratification vote go smoothly and then settle into a long period of efficient, dependable operations before we have to think about contract talks again. But there are still plenty of other issues impacting congestion that the ports need to work through.”

The Pacific Maritime Association and the International Longshore and Warehouse Union tentatively agreed on a five-year contract in February. While ILWU leadership has recommended that members vote for ratification, votes won’t be counted until May 22. The lack of a contract and operational issues led to crisis-level congestion at West Coast ports after the previous agreement expired last July.

Ports covered by Global Port Tracker handled a record-high 1.73 million Twenty-Foot Equivalent Units in March, the latest month for which after-the-fact numbers are available. Driven up by a sudden surge of backlogged cargo from vessels that were sitting at anchor waiting to be discharged after the labor dispute ended, the number was up 44.9 percent from February and 33.1 percent from March 2014. One TEU is one 20-foot-long cargo container or its equivalent.

The first half of 2015 is forecast at 8.8 million TEU, an increase of 6 percent over the same period last year.

Hackett Associates Founder Ben Hackett said the strong increases in volume are coming as ship owners are launching an excessive number of large new vessels that could lead to a price war on shipping rates.

“This upsets the supply/demand balance,” Hackett said. “There is not enough demand to justify this level of capacity increase. Expect rates on both coastal services to fall to all-time lows.”